Last Tuesday the NASDAQ made a low that created an 8.26% correction measured from the February 26 2021 high.  It spent the next three trading days trying to take out the Tuesday low and it was not able to do so.  The DOW and S&P 500 both experienced less than 4% correction measured from high to low.  Much of the narrative of the correction is the fear of rising interest rates, particularly the fear of the rate of change in interest rates.  The 10-year Treasury yield had the biggest monthly surge since 2016.  Under the rising rates fear, the growth stocks were sold off more severely than the value stocks such as the energy and financials.

We view this rising rates fear as an excuse for profit taking.  The market has been overbought and extended all year and arguably for several months in late-2020.  After the big run-up in the first half of February folks have been looking for an excuse to take profits.

The entire bull market they called the Trump rally, yet it unfolded with rising interest rates.  The Fed raised rates in January 2017 with Trump’s inauguration.

Typical March trading comes in like a lion and out like a lamb with strength during the first few trading days followed by choppy to lower trading until mid-month when the market tends to rebound higher. Ultimately, seasonal trends suggest that March will be wobbly and could be used as an excuse for further selling, but on that downturn may be cathartic and give way to further gains in the spring.

So seasonally speaking, further consolidation is likely in March, but we expect the market to find support shortly and subsequently challenge the recent highs again.  April is statistically the best month of the year.

That being said about the March low as a buying opportunity, what should you buy?  Value or growth stocks?

Innovators drive each new stock market cycle.  Their new products, services, technology and inventions are bought by consumers who are the true boss in a capitalist system as they freely choose to buy the products they want or need.  Mass production creates a higher and higher standard of living for the masses.  3/4 big market winners in the past were growth stocks, 1/4 was a cyclical or turnaround situation.

Yet even when cyclical stocks are in favor, some pretty dramatic young growth issues are also available.  Cyclical stocks in the US are often those in older, less-efficient industries.  Some of these companies weren’t competitive until the demand for steel, copper, chemicals and oil surged as a result of the rapid buildup of basic material industries after the post pandemic re-open.

Rallies in cyclical stocks may tend to be more short-lived and prone to falter at the first hint of a recession or an earnings slowdown.

The current resurrection of cyclical stocks is a good sign of a broadening early stage bull market.  It is very similar to what happened in early 2017.  After the 2016 election, the market was cheering Trump’s deregulation, which started a new bull market.  But the value stocks topped out in January 2018 while the growth stocks continued to rally until the previous 4-year cycle topped in February 2020.

All in all, this dip in growth stock is a good buying opportunity.  The $1.9 trillion stimulus is coming for sure, and another $2-3 trillion infrastructure stimulus bill is also in the works.  Remember, liquidity is the driver or sins of all things.  This type of easy money will not end up well, but it is too soon to worry.

ARKK and ARKG are the best growth ETFs which will continue to rise after this rates fear correction.

Below is the NASDAQ daily chart.  It looks like a temporary bounce is in store.  This bounce could finish the correction as well, a little too soon tell. 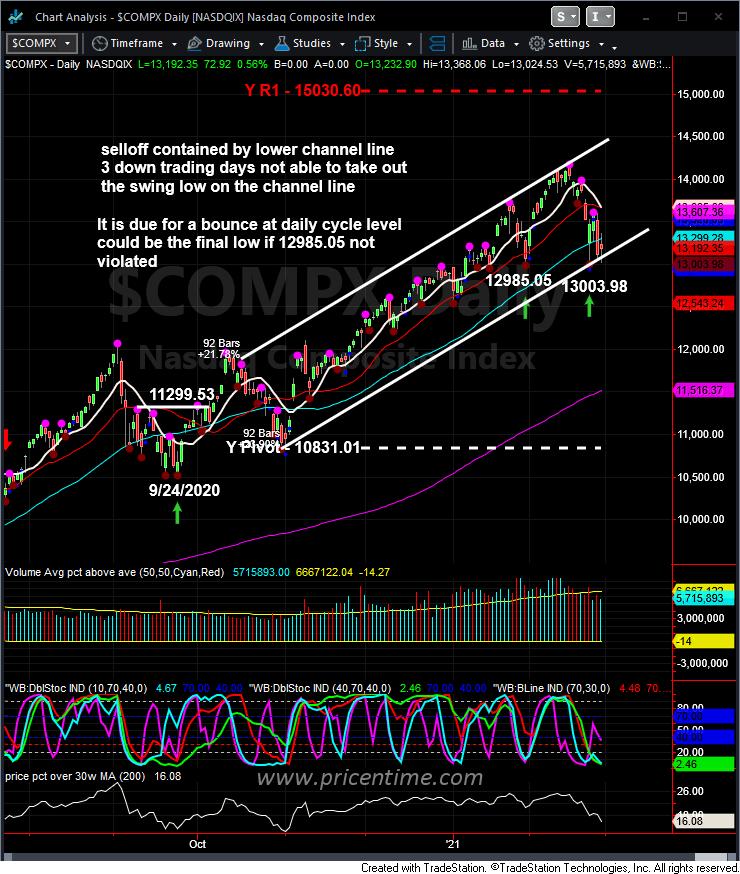 Member Only SP 500 weekly cycle
This entry was posted on Sunday, February 28th, 2021 at 5:34 pm and is filed under Hot Stocks, Member Only, Stock Indices. You can follow any responses to this entry through the RSS 2.0 feed. Both comments and pings are currently closed.