The NASDAQ double top is not confirmed yet, it needs to have a selloff from here to form one.  It has been 7 weeks since the early March low, if indeed the market sells off from here, the timing is Okay for that to occur.  The market bullish breadth is incredible with over 90% stocks are above their 200-day moving average.  It’s very difficult to use the extreme bullish breadth as a contrarian indicator to turn bearish because the market can stay this way much longer than anyone’s imagination.

The growth sector has not kept up pace with the NASDAQ.  The NASDAQ has rallied almost all the way to its February top,  while the growth stocks are still base forming, not in a rally mode.

TSLA being the leading indicator for the growth stocks, only reached 62% retracement of the February high to March low, which is in much weaker position than the NASDAQ.  Growth stock PLTR only retraced 23.6% from the late January top to March low, that is very weak reaction to the more than 50% correction.

It is very difficult to trade when the volatility is so low and the liquidity is so plenty.  That’s why the market participants have been rotating from sector to sector in a hope to find values somewhere in a very expensive market.  That also explains why we had rolling corrections while the indices stayed up.  It is almost a game of music chairs.  As unreasonable and expensive as the market is, it will continue to go on until the money spigot is shutoff.  The Fed and fiscal polices are not in any hurry to shut the money off.  Therefore the dip buying game will stay on longer than anyone’s imagination.

PLTR has bounced several times from 20-21 price level.  If the 20-21 support gives away during the market correction, it would be a great opportunity to add more shares at bargain price.  PLTR just announced that they are giving away Foundry software platform for free for any large organization to try it.  Setting Foundry software platform free for large organizations will sacrifice short term profits, but will gain long term customers.  The short term chart is weak and the long term fundamental outlook is very bullish.  We remain a buyer of PLTR if it dips below 20.

The semiconductor SMH and consumer discretionary XLY corrected with QQQ and matched up with QQQ’s reaction move from the March low.  Biotech IBB and XBI had a large correction that is in sync with the growth stocks.  So under the all well indices, there are many cross currents that can cause significant pains.

Bitcoin topped out on April 14 and it is still in correction mode.  Would Bitcoin be the leading indicator for the entire frothy market?  It could well be.

All in all, it is not a good idea to deploy new money at this point of time.  It is a time to stay put.  It is so hard for the price to go up, but when it goes down, it can be fast and furious.

Technically, the NASDAQ is forming a potential double top.  The rally volume is low and it has a divergent top on balance volume on the weekly chart below. 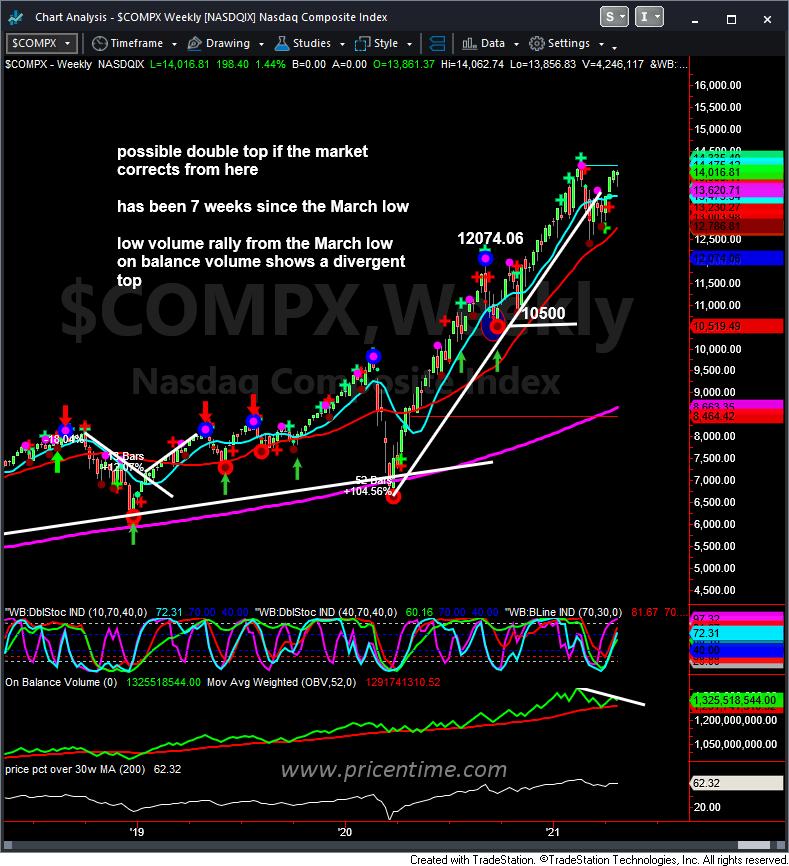 Member Only weekly cycle
This entry was posted on Sunday, April 25th, 2021 at 5:29 pm and is filed under Forecasts, Hot Stocks, Member Only, Stock Indices. You can follow any responses to this entry through the RSS 2.0 feed. Both comments and pings are currently closed.