Panic To The Upside In Disbelief

In the last few blogs, we have been warning the potential of a breakdown of 5-10% because the DOW was not able to breakout the trend line clearly for the last two weeks while the NASDAQ was in correction mode.  The bifurcated markets made us cautious and wondering what’s behind the scene to create such a confusion amid mixed fundamental signals.

It is very reassuring to see that the DOW is leading the market, not the NASDAQ.  The DOW reflects the real economy and is less speculative than the NASDAQ.  Instead of for the DOW to breakdown to join the NASDAQ on the downside, the NASDAQ will rise up to join the rally with the DOW.

PLTR is one of our major holdings.  It has corrected from 45 to 19.41, a whopping 57% correction in the last three months.  PLTR will report earnings on May 11, before the bell.  20.18 is the early March low.  If after earnings PLTR can swing back above 20.18, then the decline is over.  Typically when a stock sells into the earnings report, if there is no major bombshell negative news, the earnings reaction will be positive because the price is already low enough.  From all the official PLTR news release, we haven’t found anything negative.  We anticipate PLTR to beat estimates and the decline to be over after the earnings report.  If the correction is not over after the earnings, we are prepared to add more below 20.

When you double down on a stock, you need to ask yourself the following questions:

We have not found any flaws in the company, except the stock price is a lot lower than three months ago.  If you are a true long term investor, a lower price should be a welcome opportunity.  That’s how we view the volatility in PLTR.  Granted, we have also made money in trading the volatility, but our core holding is intact in PLTR.

Below is the DOW weekly chart.  It is as bullish as it can be.  We are expecting the market to continue the rally for the next 5-8 weeks.  That’s what we call a panic to the upside in disbelief. 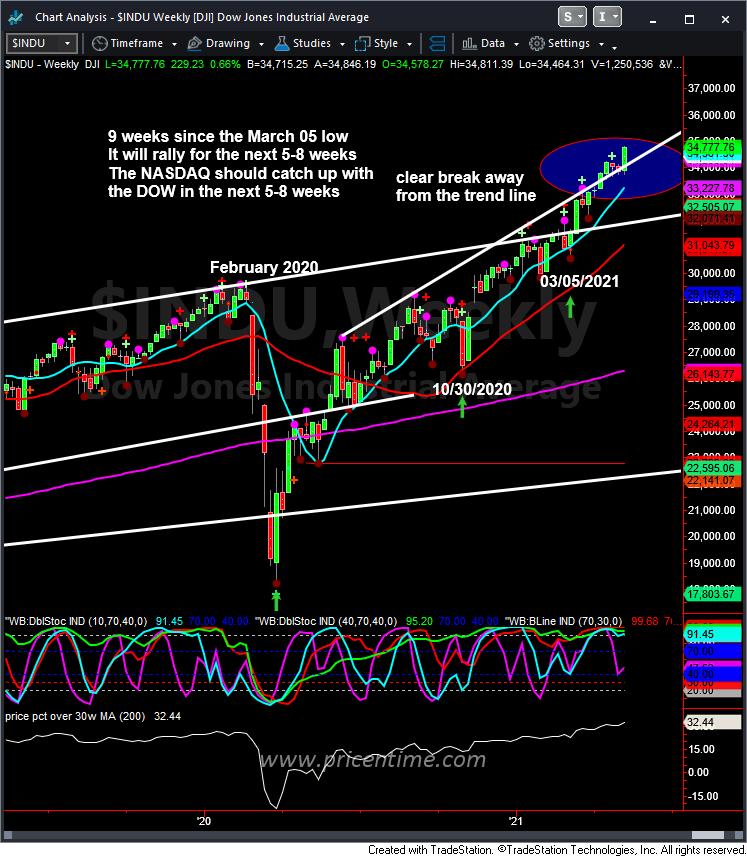 Member Only weekly cycle
This entry was posted on Sunday, May 9th, 2021 at 9:32 pm and is filed under Forecasts, Hot Stocks, Member Only, Stock Indices. You can follow any responses to this entry through the RSS 2.0 feed. Both comments and pings are currently closed.