Risk Off Or Risk On?

Last week was a short trading week due to the 4th of July holiday.  Even though the three indices closed at a fresh all time high weekly close, but the intra-week trading had a drama on Thursday, which some concluded as a technical correction as the 10-year treasury yield went dramatically lower against the expectations from the majority of the market participants.

Underneath the indices, we see:

2.  The bank/energy stocks have peaked in May/June.  Next week the banks will report earnings.  If the bank stocks follow the cycle charts, the direction is going down after the earnings report.  The re-open/higher interest rates benefits have been priced in fully.

4.  The general market may continue to hold up in July/August because the Q2 earnings report will good.  The valuation is super rich with the S&P 500 forward earnings sitting at 22 times.  The average S&P 500 earnings should be around 18.5 times.

The mega tech stocks breaking out while the 10-year treasury yield went lower is reflecting the anticipation of slower growth in the second half, that’s risk off in a one-two punch!

August-October is the traditional seasonal dark period.  By the time in August, the most of the important earnings report will be done and the market will be subject to macro events.  We don’t know what macro events could trigger the correction in the fall, but something will happen.  The overvaluation has to be corrected before the next leg up.

We could see a 16% correction in the fall, but that will be a great buying opportunity.  We have not had any sizable correction since the March 2020 bottom  All we had were rolling corrections.  First was the super expensive growth stocks such as TSLA/PLTR/ARKK, then the SPACs, then bitcoin.  Now it’s the turn for the cyclical/value stocks.  Because of the rolling corrections underneath the major indices, the general market was able to appear to be very calm, like a placid lake.  Volatility will pick up in August.

PLTR is one of our major long term holdings.  Below is the PLTR weekly chart for near term analysis. 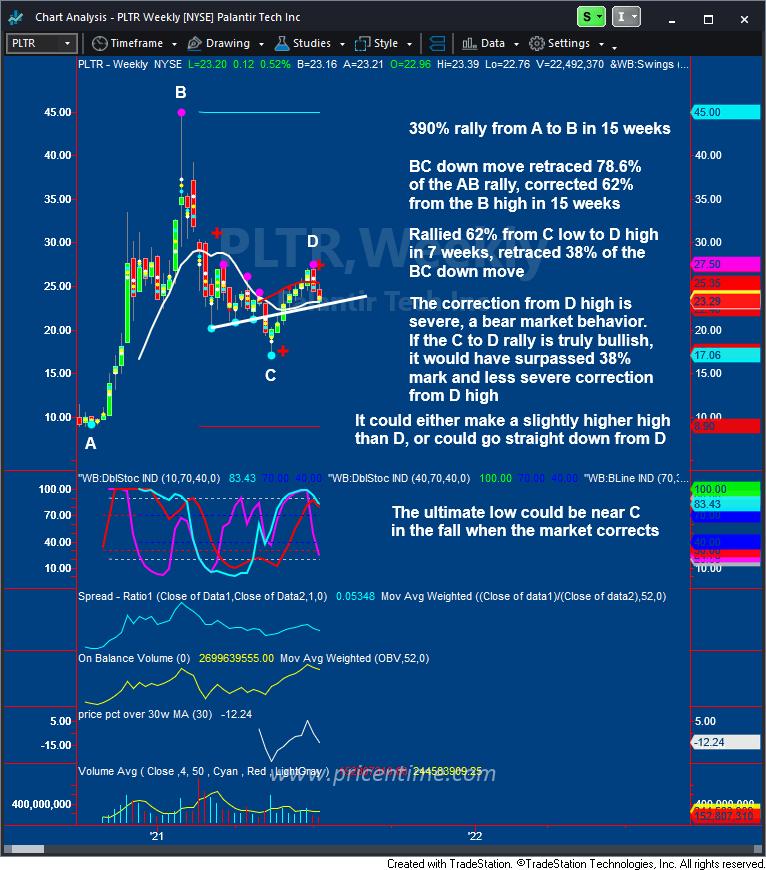 This entry was posted on Sunday, July 11th, 2021 at 6:53 pm and is filed under Hot Stocks, Member Only, Stock Indices. You can follow any responses to this entry through the RSS 2.0 feed. Both comments and pings are currently closed.