Evidence Increasingly Tilting the Risk on the Downside

In our last blog, we projected that the bank stocks would fall in the direction of cycle regardless of their earnings report.  They did fall after earnings report.  BAC is the weakest and MS is the strongest in the group of BAC, C, JPM, GS and MS.  The banks are making money, but the market didn’t care.

The NASDAQ had a worse week than the S&P 500 and DOW last week.  The weekly NASDAQ chart presents a very clear breakout position and the possibility of a breakout failure is building up. 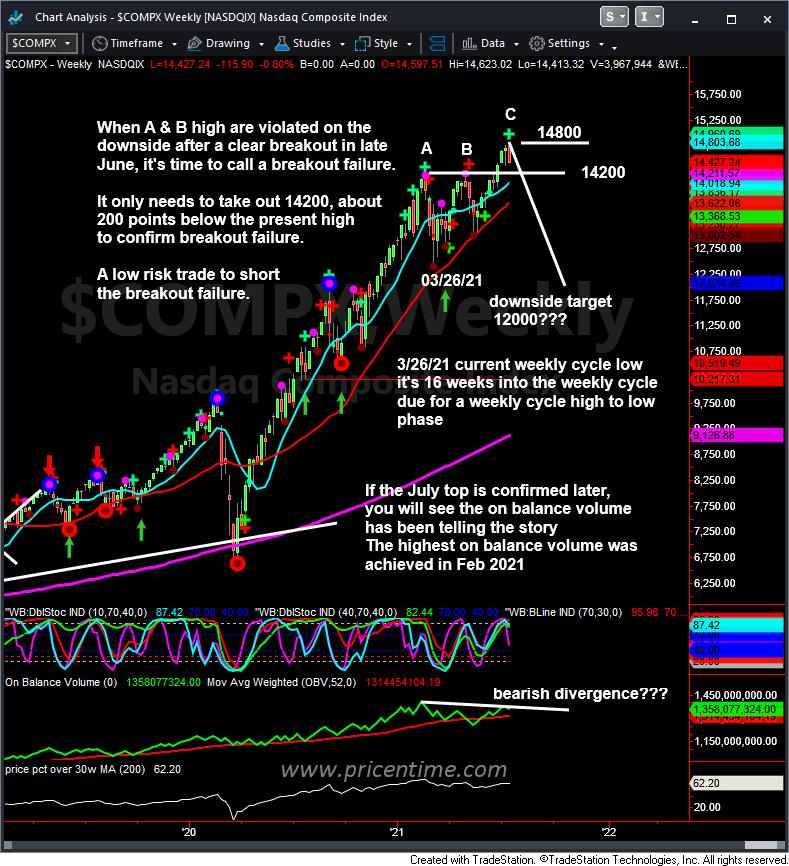 The reasons of a possible breakout failure:

In order to confirm the July top and the subsequent greater than 15% selloff, the NASDAQ and S&P 500 charts have to confirm a breakout failure. The DOW has not confirmed its breakout yet.

In the weekly NASDAQ chart, you can see clearly that the NASDAQ is currently in breakout position.  If it turns around and takes out the Feb and Apr top around 14,200 with momentum, you know the current breakout has failed and the correction is underway.  The NASDAQ is at 14427 now; it’s only about 200 point below to confirm the top.  It’s a relatively small risk when you try to short the top.

What to do after confirmation?

We would like to remind our subscribers that the bull market started in March 2020 has ways to go.  The secular digitization trend is just getting started.  This pending correction should be viewed as opportunity.  Corrections are healthy and normal market behavior, but when it finally hits your portfolio, it would not feel so healthy and normal.  Our cycle analysis is striving to provide a longer cycle view so you will would have less stress and be calmer during the market sellloffs.

forecast weekly cycle
This entry was posted on Sunday, July 18th, 2021 at 6:19 pm and is filed under Member Only, Stock Indices. You can follow any responses to this entry through the RSS 2.0 feed. Both comments and pings are currently closed.