When Will A Rolling Correction End?

The NASDAQ bounced sharply from its prior support level around 14200 last week.  The dip buying crowd successfully plugged the hole.  Now it looks like the NASDAQ will march on to attempt 16000 in the next 4-6 weeks.  Underneath the raging indices, there has been a rolling correction since early 2021.

What is a rolling correction?  How can a bull market have a rolling correction?  The stock market is a market of stocks, there will also be some stocks that are outperforming and under-performing the general stock market at different times during its 4-year cycle.  For instance, between March 2020 to February 2021, ARKK type of hyper growth unprofitable stay home stocks outperformed the NASDAQ by a very wild margin.  ARKK ETF achieved incredible valuation (got ahead of itself) at its peak in February 2021 and it has since been in correction, meaning under-performing the general stock market and not participating in the recent rally.  There were a few bounces here and there along with the general market, but no way near its prior glory.

TSLA is the largest holding of ARKK and is the representative of all hyper growth stocks.  TSLA is super expensive and yet super powerful in the EV sector.  TSLA achieved its momentum peak at the end of January 2021 and made a double bottom in March and May a little bit below 550.  The bounce from the double bottom is only 38% retracement of the down swing.  TSLA is not trading in the same direction as the NASDAQ.  TSLA is in firm correction (stayed in penalty box as a direct result of its prior super run from March 2020 to January 2021) while the NASDAQ is in full fledged rally mode.  TSLA will report earnings on Monday July 26 after market close.  Regardless of the earnings report tomorrow, TSLA will stay in the down trend until a final bottom that occurs at the same time with the general stock market.  In order words, the rolling correction bottom is not in place until the indices have bottomed.  The rolling correction bottom can’t happen when the indices are at all time highs.  There may be some short term price reactions to the earnings report on the upside, but any upside should be short lived.  A new bullish trend in TSLA will take time to emerge.

Will TSLA reverse the correction and outperform the general market again in the future?  That depends how you view the TSLA fundamentals.  If you believe TSLA has a long run way with a bright future, then you should stay put with your TSLA holdings.  It doesn’t pay to get out now simply it is under-performing the NASDAQ.  When the indices enters correction, TSLA will be outperforming the NASDAQ because it has been in correction for some time already.  The double bottom a little bit below 550 could be the price bottom, but not the time bottom, meaning a new bullish trend in TSLA will not occur until the correction time has exhausted.  That’s why fundamental investors stay with their favorite stocks for a long time to capture the big gain, while the traders want momentum, wanting their stocks to turn a big profit fast.

TSLA is a good example why a rolling correction exists in a bull market.  TSLA’s momentum peak (super expensive) in February 2021 made it a weak candidate in a raging bull market.  The price got ahead of its fundamentals.  TSLA has to grow into the rich valuation.

Back to the NASDAQ.  2021 is very similar to 2018.  The NASDAQ peak momentum was achieved shortly after the Tax Cuts and Jobs Act of 2017 was passed.  The stock market rallied since Trump won the election in November 2016.  2017 non stop rally was in anticipation to the tax cuts.  As soon as the tax cuts were here, the market momentum peaked.  Since it was still in the early stage of a bull market, the indices continued to make new highs with narrower breadth, the rolling correction started with the peak momentum.  The market spent almost the entire 2018 going through a rolling correction in different parts of the market.  They all finally bottomed in December 2018.  Some prior ( Feb 2016 to Jan 2018) winning stocks participated in the second part ( Jan 2019 to Jan 2020) of the 4-year cycle (Feb 2016 -Mar 2020).  Some stocks didn’t.  SQ is a good example how it performed in the prior 4-year cycle (Feb 2016 – Mar 2020).  SQ broke out its IPO base in May 2017 and peaked in Oct 2018.  SQ did poorly from Oct 2018 to Mar 2020 against the general market.  After it made the crash bottom along with the general market crash in Mar 2020, it roared back.  The market finally rewarded its growth after the tortuous period of Oct 2018 to Mar 2020.

Below is the NASDAQ weekly chart.  Last week was testing the prior support at 14200.  Now it is firmly off the support level, it will continue to rally for the next 4-6 weeks to attempt 16000.  We arrived at 16000 based on the fib price extension.  That was how 2018 price extension turned out.

The market didn’t have to do anything.  We project market tops and bottoms so we have certain expectations.  When the market is not delivering what we are anticipating, we change accordingly.

For now, we view the rally with narrowing breadth as a warning sign. 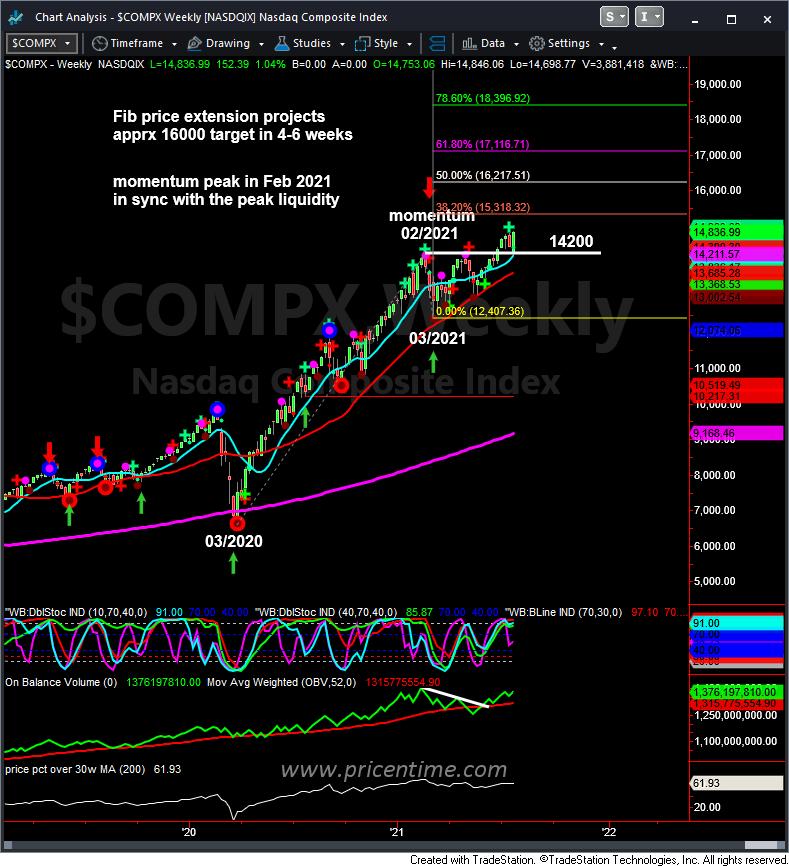 Member Only seasonal cycle
This entry was posted on Sunday, July 25th, 2021 at 8:37 pm and is filed under Forecasts, Member Only, Stock Indices. You can follow any responses to this entry through the RSS 2.0 feed. Both comments and pings are currently closed.