The latest job data released on last Friday was soft, not so great, but also not so gloomy which is good for the market because it could push the Fed’s tapering further down the road, at least that is what the market was thinking at the moment.  Yes, the soft data is indicating the economy is slowing down due to a number of reasons such as the Delta variant, supply chain and inventory issues, etc..  The slowly grinding higher DOW is reflecting the soft and tired economy, yet the NASDAQ is thinking the sky is blue.

Is the sky is really that blue? We don’t think so.  The mega tech stocks count for 40% of the NASDAQ.  The NASDAQ rally is defensive in nature, investors are risk averse and hiding in the mega techs for shelter.  This is a breadth indicator for a near term top, meaning the rally in NASDAQ is lacking broad participation.

Because the DOW is reflecting the soft real economy and the NASDAQ is the new blue chip reflecting safety and growth, these two indices present different cycle counts.

Below are the DOW and NASDAQ weekly and daily charts.

If the market indeed turns down around the FMOC meeting, it would be very bearish for the NASDAQ and the market in general. 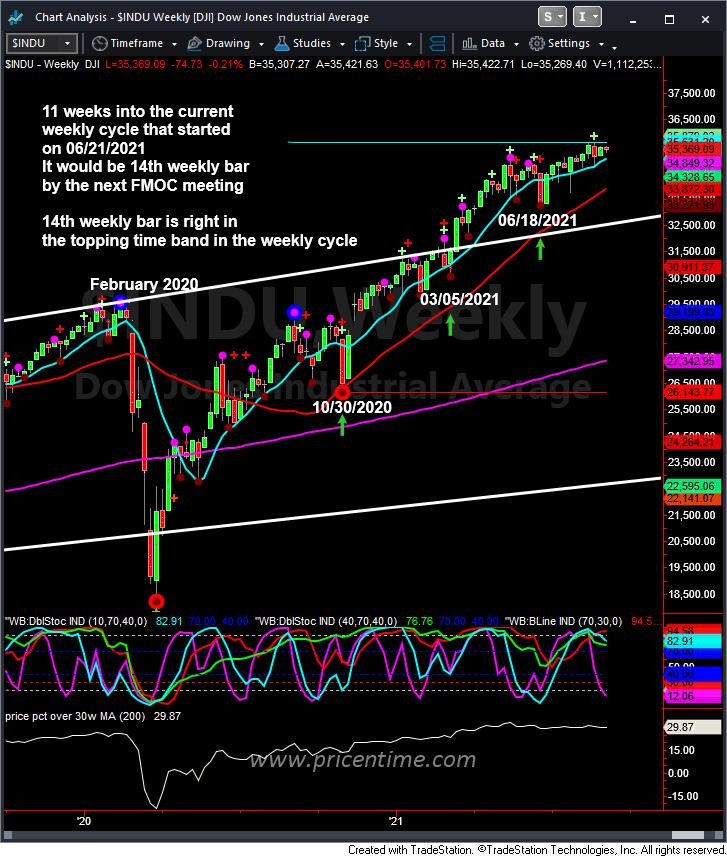 Member Only weekly cycle
This entry was posted on Sunday, September 5th, 2021 at 7:05 pm and is filed under Forecasts, Member Only, Stock Indices. You can follow any responses to this entry through the RSS 2.0 feed. Both comments and pings are currently closed.