The Market Left Us In Suspense Last Friday

The DOW failed to close below 34140, which is needed to imply a sharp decline.   The NASDAQ also failed to touch the support level at 14800.  All in all, the general market is stalling, not making a clear statement either way.  The FOMC meeting next week probably will be non event since everyone is anticipating.

The small cap Russell 2000 index outperformed the big three indices.  The hyper growth expensive stocks such as PLTR outperformed the mega tech growth stocks greatly.  The street is talking about rising rates and another growth to value rotation.  But the rotation to value didn’t happen last week because the value sectors such as XLB (materials), XLI(industrials), XLF(financials) and XLE(energy) performed badly last week relative to the hyper growth stocks and the small caps.

Is the market setting up another great run for the hyper growth stocks from here?  Judging from the recent price actions of ARKK, the representative of hyper growth stocks, the odds are greater than 50%.  It is a contrarian point of view because the street is anticipating rising rates to squash the expensive stocks measured by price to sales, not price to earnings because they are not profitable yet.  The economy is softening and real growth are hard to come by, especially with the fiscal stimulus policies falling off a cliff.  As long as the 10-year treasury yield stays below 3%, the hyper growth stocks will continue to perform even though the rates are rising, but from an extreme low level.  Who would want to invest in cyclical stocks in a softening economy?  Not us, we believe those cyclical stocks are value traps in the new digital economy.

Judging from price actions from ARKK and IWM, and VIX closed below the previous week’s close, we intend to conclude that the much anticipated fall correction probably is non event.  We will be able to confirm the correction is over in the next few days.

From cycle perspective, it is only 18 months into the current 4-year cycle that started in March 2020.  It is totally possible for the first half of the 4-year cycle to last until Q1 2022.  In other words, since we don’t get a fall correction, then it will run into Q1 2022 to make the 4-year’s half cycle top.  This is very similar to 2017 that only had two small corrections.

Below is the NASDAQ daily chart.  Clearly the support level 14800 was not touched.  If it can take out the swing high at 15205.50 in the next 1-2 trading days, then the prior daily cycle low at 14984.68 is confirmed and a new daily cycle starts.  Time wise, this daily cycle H-L phase has been 8 days which is in the proper timing band for it to conclude the daily cycle.

We will send out emails out immediately when that happens next week. 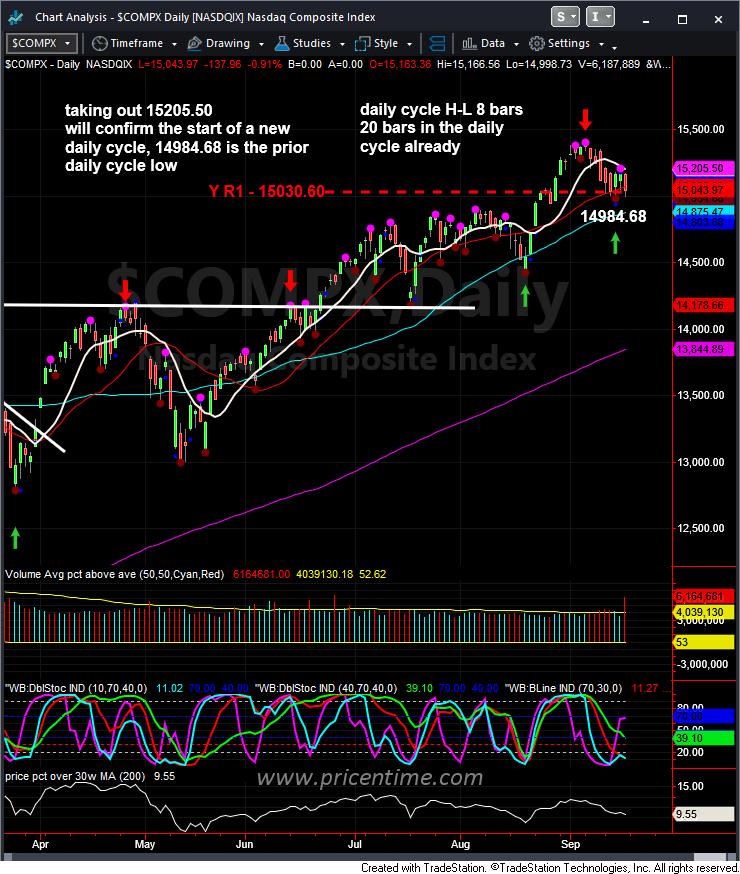 Member Only
This entry was posted on Sunday, September 19th, 2021 at 8:16 pm and is filed under Hot Stocks, Member Only, Stock Indices. You can follow any responses to this entry through the RSS 2.0 feed. Both comments and pings are currently closed.