No Tapering Yet, But The Mood Is Still Risk-Off

The Fed spoke last week and saved the day.  The Fed talked about tapering “soon”, but not now, so the market breathed a sigh of relief!  Last Monday the three major indices fulfilled a peak to trough 5% correction.  Then the market quickly reversed the correction.  The S&P 500 and NASDAQ traded above their perspective 50-day moving average without hesitation.  Based on the price actions, we have to conclude that the first wave of the correction is over, at least for now.

Underneath the indices, energy, financials and small caps are market leaders.  The 10-year treasury yield shot up to a two-month high at 1.435%.  So the market is thinking inflation is running high and interest rates will go up.  These beliefs are contrary to the Fed’s statements that inflation is transitory.

Will the Fed be forced to tapering and raising interest rates sooner than when they plan to do so because of the inflationary pressure?  That’s very likely!  The excess money from the emergency easy monetary policy should have been drained from the system already.  The delay will cause the exit to be disorderly which directly impacts the market.

The lack of continued correction and the out-performers like energy/financials/small caps in conjunction with the rising 10-year treasury yield point to another rotation, meaning the mid 4-year cycle top is not in yet.  Money will take refuge in energy/financials/small caps, the mega tech caps and hyper growth stocks will suffer relative performance.

If the indices are able to take out the prior all time high and continue to make new highs, then we can believe the fall correction is truly over, and the mid 4-year cycle top will extend to Q1 2022.

If the indices continue to trade sideways without taking out the prior highs soon, then it will risk to go down as there are plenty of catalysts that can take down the market.

The economy is softening.  NIKE, Fedex and Disney all reported disappointing earnings, mostly due to supply issues such as labor and parts/goods shortages.

If the market survives September, then it still has to deal with October, a traditionally volatile month in a year.

Because it is so far into the first half of the 4-year cycle (March 2020-???), the market participants’ behaviors are more cautious than during the early cycle stage like in 2020.  The meme stock type of speculative trading is hard to come by.  So when you see some stocks rallying or breakout, mostly likely it will be short lived.  So please don’t get sucked in thinking you are getting in early in a breakout situation.

At the late stage of a bull run, only the high quality stocks are worth buying because they are the hiding places for institutions.  As a retail investor, you are better off stay in cash because you don’t have the rules forcing you staying in stock positions.

So even with the market rallied out of a quick 5% correction, we are still not sold that an everything rally is coming.  We still believe it’s better to stay on the sidelines at the moment.  Get in the market now is like to smoke the last cigarette puff.

It is 4 days in the current daily cycle.  The price has already reached 62% retracement of the 5% correction.  We should see some resistance around the current price level.

Next week there are two major DC dramas with infrastructure bill and debt ceiling.  We should see some volatility around those events. 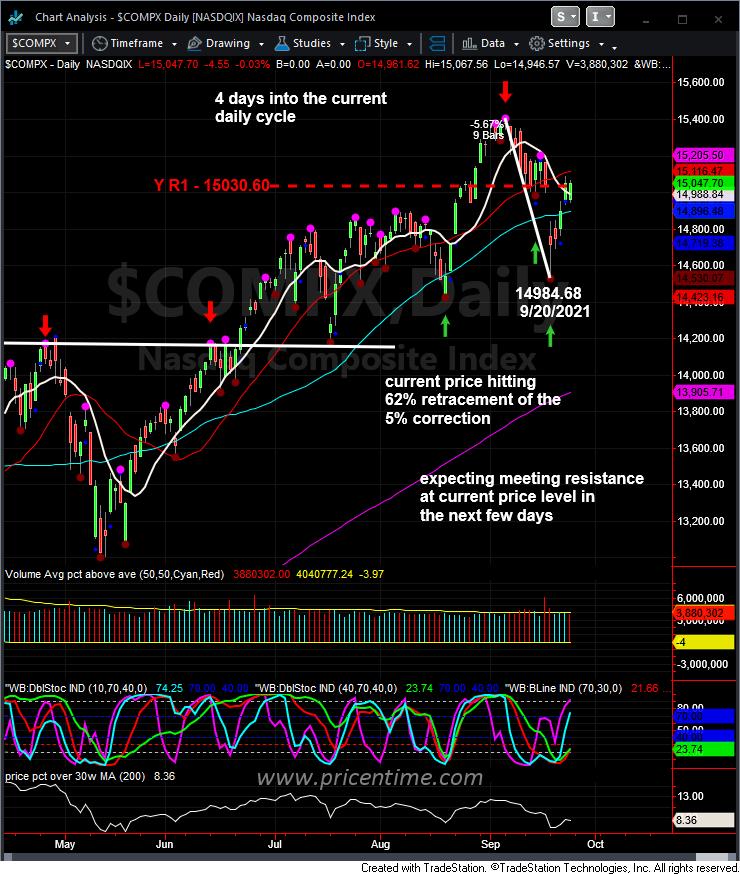 Member Only SP 500 weekly cycle
This entry was posted on Sunday, September 26th, 2021 at 8:32 pm and is filed under Member Only, Stock Indices. You can follow any responses to this entry through the RSS 2.0 feed. Both comments and pings are currently closed.