The Seasonal Correction is OVER

As we anticipated, good earnings did power the market out of indecision last week.  The DOW and S&P 500 decisively closed above their perspective 50-day moving average.  The NASDAQ decisively broke the down trend line with volume.  All in all, the seasonal correction is OVER.  If there aren’t any surprises (unknown events /shocks) down the road, the market should slowly grind higher into Q1 2022.

The current energy rally is NOT the same as the last rally from 2002-2008.  The current high oil price is caused by the supply problems, rather than demand.  The current energy demand hasn’t surpassed the demand peak in 2019.  That is understandable because now we have more electric vehicles on the road, more online shopping and more work from home than in 2019.

Below is the NASDAQ daily chart.  You can see the clear breakout against the down trend line.  The 14175 provided firm support during this correction.

It is 9 days into the new daily cycle.  We expect the VIX to come down and the market to grind higher slowly. 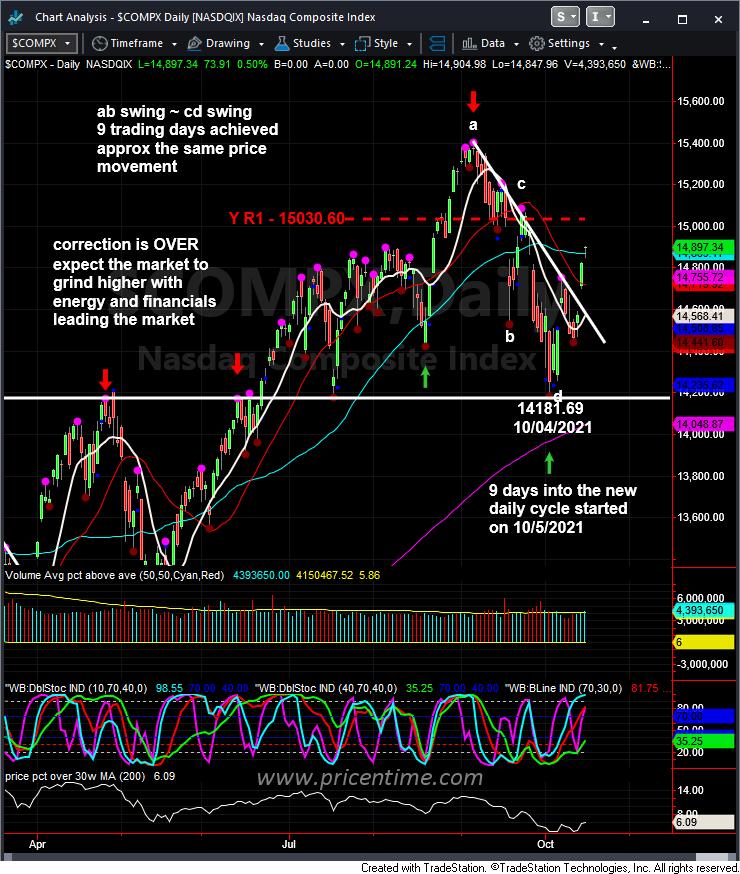 Member Only
This entry was posted on Sunday, October 17th, 2021 at 8:42 pm and is filed under Hot Stocks, Member Only, Stock Indices. You can follow any responses to this entry through the RSS 2.0 feed. Both comments and pings are currently closed.