The recent rally in electric vehicle stocks such as Tesla, Lucid and the new IPO Rivian got people talking about Apple’s potential entrance to the electric and autonomous vehicle market in 2025.  Bloomberg released a report to confirm the rumor, which caused Apple stock to rally to a new high.

This is a total speculative behavior in Apple stock that is similar to summer 2020 when the NASDAQ 100 had a crazy rally driven by options activities by Softbank.  Lately Nvidia picked up the the metaverse fever which was started by the company name change in facebook.  Nvidia, being the metaverse chip maker, had a breakout after earnings beat.  The market rewarded the right winner in the right sector, while the small cap metaverse player such as VUZIX had a breakout failure.  VUZI ran 60% from its October low, but it was rejected at 200-day moving average.  The breakout failure in VUZI and many other stocks such DASH & SOFI are warning signs that the market is very close to a top.

The Chinese economy is slowing down due to the crackdown in its real estate sector and zero tolerance of COVID.  China is the only country in the world that still implements total population lock down while other countries have stayed away from such policy.  This zero tolerance policy mistake will cause damage to the already weakened Chinese economy, which in turn will hurt Europe and the United States as well.  Europe, being the biggest trade partner with China will suffer more than the US.

To sum it up, here are the warning signs that we can’t ignore:

2.  Lack of participation in many already significantly corrected stocks, VUZI breakout failure is a good example.

3.  The market is totally ignoring the troubling signs from China.

Below is a daily chart of Russell 2000 small cap ETF IWM.

As you can see in the IWM daily chart, IWM topped on March 15 2021.  It has been under performing ever since.  It had a breakout on 11/02/2021, then it was promptly sold down to below the breakout price.  If the mega tech stocks start a correction, the small caps will crash immediately even though many of the individual stocks have been going through a severe correction since Q1 2021.

Due to the seasonal effect, the mega tech stocks could continue to rally or pause a little to give the small caps a chance to catch up somewhat.  Either way, we should heed to the warning signs to be careful with new capital.  Probably it is not a bad idea to take some profits as the likelihood of a Q1 2022 correction is increasing by the day. 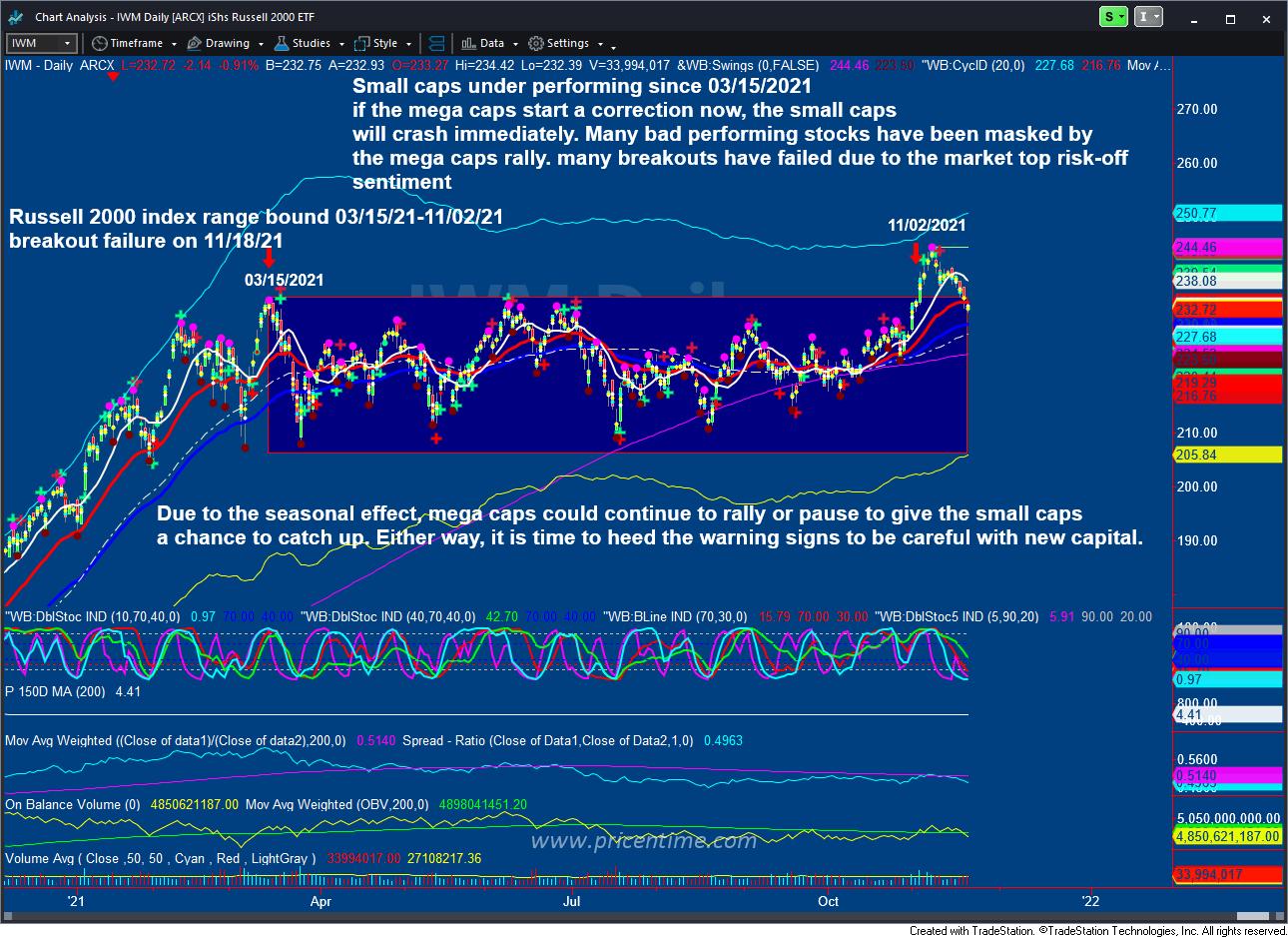 This entry was posted on Sunday, November 21st, 2021 at 7:55 pm and is filed under Forecasts, Hot Stocks, Member Only, Stock Indices. You can follow any responses to this entry through the RSS 2.0 feed. Both comments and pings are currently closed.