The Fed Cemented The 4-Year 1st Half Cycle Top

The market tanked on black Friday due to the emergence of Omicron variant out of South Africa.  The market did a very anemic technical bounce on Monday 11/29/2021.  Then out of left field, the Fed Chair Powell spoke about accelerated tapering pace due to the higher than expected inflation.

The market had hoped that the Fed may delay the tapering because of the Omicron variant.  Now the Fed spoke loud and clear that tapering (reduced monthly bond purchase) will happen faster than the Street had hoped because inflation is too high.  Of course, the market didn’t like it and reacted negatively last week.

Fundamentally, we are very confident that the market has reached its 4-year cycle 1st half cycle top because of this fundamental change in the Fed’s monetary policy.

Today the market is at a similar location as in October 2018, which is the top of its 4-year 1st half cycle top.  If history is a guide, we should expect the current market to finally bottom in Q1 2022 with about 20% correction.  Because it is very oversold in the short term and due to seasonality, the market might bounce in the finally weeks of December.  The selloff will resume again in Jan 2022 to finish the bottoming process.  So please be careful.  Don’t get sucked into the bear market rally.

In this current 4-year cycle, we have had a phenomenon of momentum outperforming innovation growth stocks due to the outsized influence from ARK Invest. As a matter of fact, ARKK is the momentum index for the entire stock market.  ARKK ETF is consisted of many non-profitable companies that are selected by ARK Invest as innovators, which will disrupt our lives in the next 5-10 years significantly.  Those companies could be future Apple, Amazon, etc..  Due to the extreme easy monetary and fiscal polices, the retail investors speculated and have hopped on the same innovative train with ARK Invest.  ARKK had an outsized performance of 384% out of the pandemic low at 33 in March 2020 to the momentum peak in Feb 2021 at 159.70.  2021 has proven to be a bad year for ARK Invest and the cycle had turned on ARKK 9 months earlier than the general stock market.  So far ARKK has corrected 43% off its high at 159.70.  It wouldn’t surprise us to see ARKK correct more than 50% when this correction is finally over.

There are many people compared ARKK to the DOTCOM bubble due to the very high valuation of the ARKK type of stocks.  They believe the ARK Invest chief Cathie Wood is leading the retail investors into a bubble territory.  We see merits in this argument, but we also realize the differences between ARKK and DOTCOM bubble.  Many of the ARKK type of stocks are making money today, they have the ability to make money.  Back in the DOTCOM days, many of the bubble stock companies didn’t produce any revenue.  All they had were some business plans plus a DOTCOM name.

So we do believe that ARKK will come back, but it’s going to take some time.  Below is the prior and current 4-year cycle analysis which should give us some guidance. 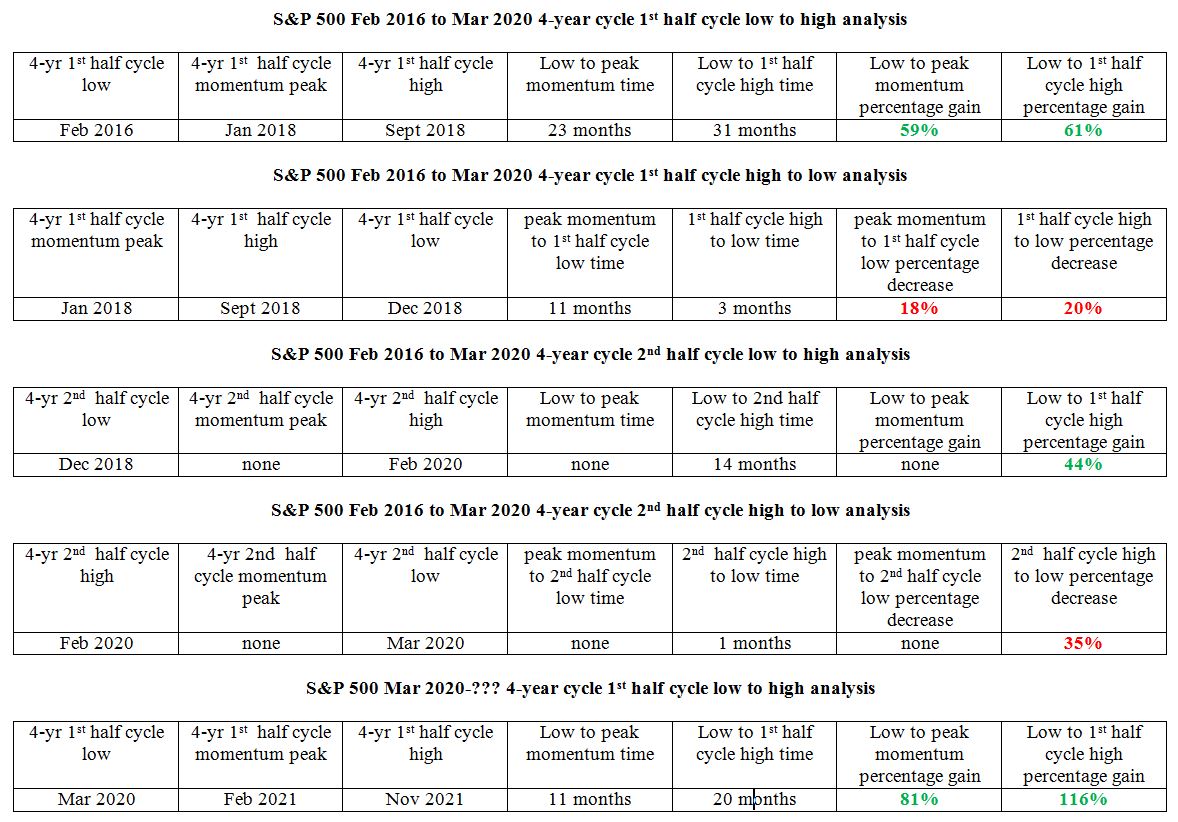 From the above table, you can see that:

This entry was posted on Sunday, December 5th, 2021 at 7:00 pm and is filed under Forecasts, Member Only, Stock Indices. You can follow any responses to this entry through the RSS 2.0 feed. Both comments and pings are currently closed.