There Is Only 10% Chance The NASDAQ Has Finished Going Down

Futures and options contracts, unlike a stock, have an expiration date. Large bets have been placed in the futures markets, and triple witching is when those traders will have to decide if they will roll their futures contracts over and maintain a position in a non-expired contract, or close their futures position, which could be buying or selling, depending on the direction of their original trade.

Options traders also find out if their options expire in or out of the money. On such days, traders with large positions in these contracts may be financially incentivized to try to temporarily push the underlying market in a certain direction to affect the value of their contracts. The expiration forces traders to act by a certain day, causing trading volume in affected markets to rise.

All indices gap opened lower than previous day’s low on Friday, but all refused to carry on the downside momentum shortly after open.  The NASDAQ led the small cap and hyper growth stocks to hold the plunge on the downside.  The failed follow thru on the downside caused short covering in ARKK ETF, which gave ARKK a big day with 5.8% increase.

The rally in ARKK on Friday is by no means sending a signal that the market correction is over.  It is only a relief rally that was caused by short covering.

On the NASDAQ daily chart below, you can see that:

The DOW and S&P 500 are all geared to move down.  The little upside momentum in NASDAQ and ARKK last Friday is not trustworthy.

Danger ahead as we said in our private email.

This time the correction could be slower than previous corrections for the reasons below:

We believe the 4-year mid cycle top has been made in November 2021, it could take a few months to finish the mid cycle transition.  The market could be in some kind of sideways for a little while, then a fast plunge to finish it off.  We see the market to trade sideways to down from here.  The risk is on the downside.

It’s not a good idea to start a new position while the general market is waiting to reset. 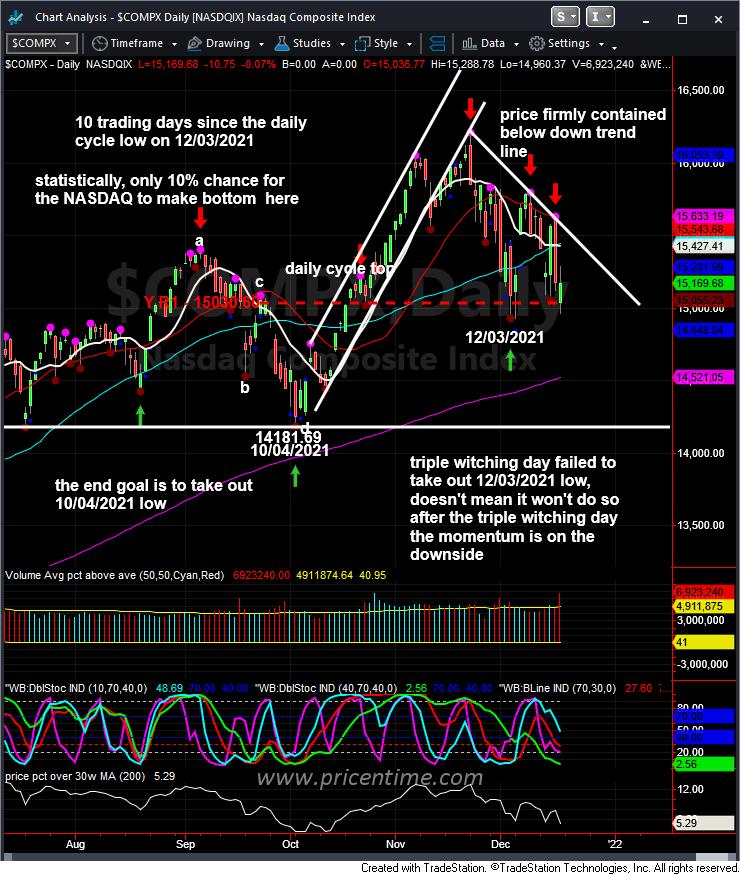 This entry was posted on Sunday, December 19th, 2021 at 6:38 pm and is filed under Forecasts, Stock Indices. You can follow any responses to this entry through the RSS 2.0 feed. Both comments and pings are currently closed.