The ARKK innovative ETF lost 10.75% last week.  At the capitulation low of 82.65, ARKK lost 48% from its February 2021 momentum high.  The talk of the street has been to avoid the growth stocks that don’t produce any profits yet and move money into the sectors such as oil and banks that do produce profits.  This type of rotation will not last long.  75% of the big market winners in the past were growth stocks and 25% of the big winners were cyclical stocks or turnaround situation.  Yet even when cyclical stocks are in favor, some pretty dramatic young growth issues are also available.  Cyclical stocks in the US are often those in older, less-efficient industries.  Some of the companies weren’t competitive until the demand for oil surged as a result of climate change activism.  Climate change activism has permanently destructed some oil production capacity in the last 12 years that caused the supply issue for today’s economy that is still pretty much depended on the fossil fuel. Rallies in cyclical stocks may tend to be more short-lived and prone to falter at the first hint of a recession or an earnings slowdown.  The secular tech growth stocks are powerful forces in the new economy that can grow, it doesn’t matter what the state of the economy it is in.  The only thing wrong with the growth stocks is valuation.  The ARKK innovative ETF bubble, crypto bubble and the super high NASDAQ valuation all need to be brought back to earth.  This correction in NASDAQ is a good thing that creates opportunity to get in the winners at a reasonable price.

Cathie Wood single-handedly created a bubble in innovation stocks. The deep bear market will take 24-36 months to work off the excess just like the DOTCOM bust did. She got it right with TSLA and she is treating every one of her picks as another TSLA which she bought all the way into the bubble price territory. Some of ARKK stocks may make it to be disruptors down the road, some maybe outright losers. At the end of the day, there is a price for everything. You just can’t pay exorbitant price for a pipe dream. NVDA is a major disruptor in semi space, ARKK doesn’t own one single share of NVDA. Moderna vaccinated the entire world with MRNA technology, ARKG doesn’t own one single share of MRNA, but own loads of ARCT that can’t even make a vaccine. How can they continue to claim they are experts in genomic space when they missed Moderna and continue to load up losers like BLI? ARKK’s outsized run from the pandemic low was ARKK’s realized pipe dream. Watch for ARKK to languish in the most hated space until 2023. For now the whale oil and bloated banks will shine. Oil and banks is the flip side of the ARKK trade. There isn’t anything Cathie can do about it. Mean reversion is the law here.

Yes, we did send out a note earlier last week for getting long with the energy stocks.  The traditional energy sector counts for 3% of the S&P 500 market cap with 5% earnings.  Because it has been so under capitalized for so long, there will be new money flowing into energy sector that will drive more gains in energy stocks.  We just have to keep our eyes open with the gains in energy stocks, they will not last forever.  When the oil price reaches a high enough number, let’s say when the oil price is above $100, you know it will create a demand destruction, i.e. people will stop driving.  That’s when the high oil price will tank the economy.

On the daily chart below, you can see the December 20th low is a support.  The December 3rd low provided support during the December 20th selloff.  The NASDAQ could be meeting support here again.  Last Thursday ARKK made a capitulation low of 82.65 and it refused to make a low last Friday while the NASDAQ made a slight lower low.  Whenever we see a divergence between ARKK and the NASDAQ, it is trying to tell us something.  The entire market is trying to take down ARKK.  When ARKK refused to make a low with the NASDAQ, we have to pay attention.

If the NASDAQ turns around from here, it is by no means that the correction is over.  Perhaps this selling wave is taking a pause.  The market could be waiting for more clarity from the January Fed meeting.  So it is a possibility that the market is holding up until the Jan 25-26 fed meeting.  It is hard for the market to down when the energy and financials are rallying.  The market can only go down hard when everything is going down. 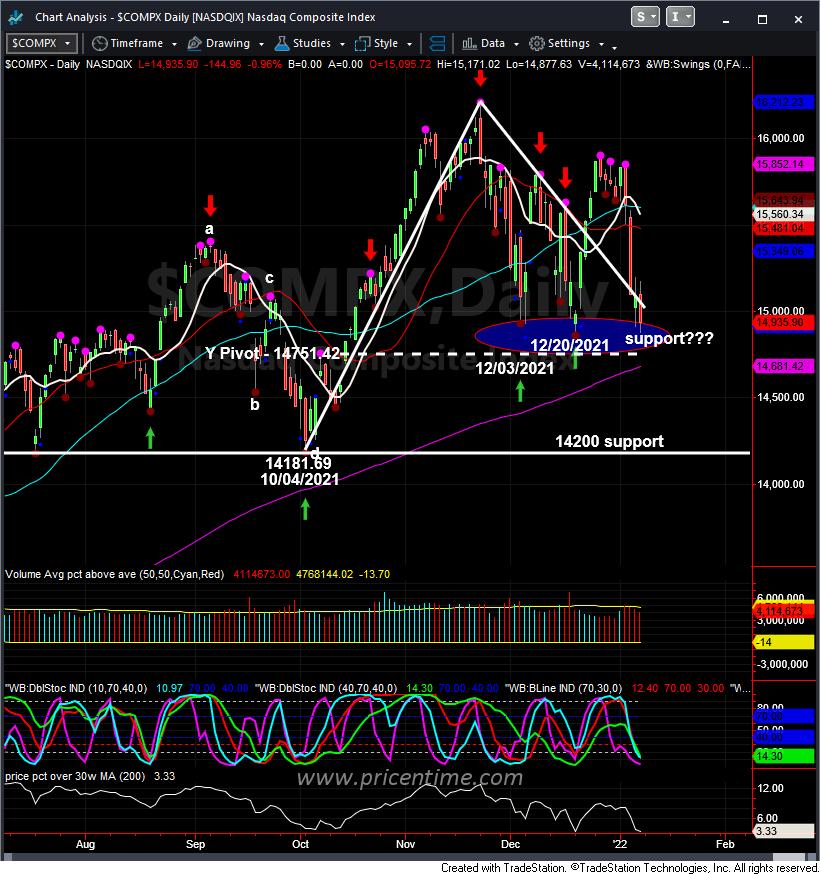 This entry was posted on Sunday, January 9th, 2022 at 6:59 pm and is filed under Forecasts, Hot Stocks, Member Only, Stock Indices. You can follow any responses to this entry through the RSS 2.0 feed. Both comments and pings are currently closed.