The First Selling Wave Is Done For Now

Last Monday the market made a capitulation low because in the following three trading days the shorts failed to take out the Monday low despite trying very hard in doing so.  Following Apple’s earnings release on Thursday after the market close, the shorts finally gave up and the longs reversed the downside energy on Friday.

Below is the daily S&P 500 chart that shows the formation of the first and second selling waves.  This is a price and time forecast based on past market data.  The market may not do exactly as what is showing here, but it is our expectation.  When the market is not doing what we are expecting, we can react with stoploss orders.  It is best to have a trading plan than not have one.

You can see that:

3.  The second selling wave is an equal swing from the reaction rally high.  The second selling wave is projected to end the day before the Fed meeting on March 15-16.  The market is expecting the Fed to raise interest rates in the March meeting.  The speculation is about how high the interest rates will go, a quarter point raise or 50 basis point???

Again, this is a framework of the correction based on past market data.  You need to be flexible with the formation because the market never does exactly as people forecast, but will not be too far from it. 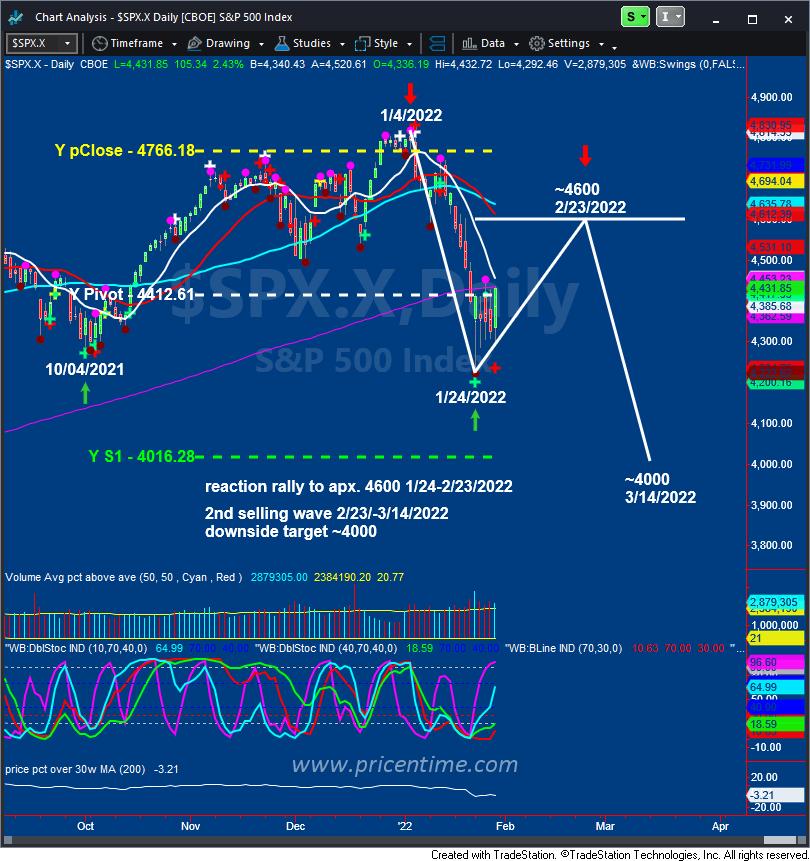 Although we are not certain that the market will play out exactly as what we forecast here in short term, but we are certain that this is not a start of a long secular bear market.  This bubble in innovation stocks is not a DOTCOM bubble that will take 15 years to break out.  This crash in innovation stocks is a correction that will only take 24-36 months to work itself out.  There is a major difference between 15 years and 24-36 months!

We are in a very parallel time to the roaring 20’s because of all the technological innovations that was induced by the advent of Internet.  The roaring 20’s actually began with the combustion engine and the 1903 was a panic low just as the 2009 panic low.

We still own KPTI stock.  KPTI stock has been trading very firm against the broad market and biotech XBI ETF since the beginning of the year, year to date it has gained 32.8%.  KPTI released preliminary Q4 results on January 10th and convinced the shorts to take it a little easy.   There is a pending catalyst for KPTI to go a lot higher soon if the top line clinical data of SIENDO trial is positive.  Based on the information released by the company, if the top line data release is around mid February, then result is very good that will fundamentally change the company’s valuation.  Anyway, we are still long the stock and have added more when the price was lower.  We took a bet that the cancer drug Selinxor is more valuable than what the shorts have been selling.

This entry was posted on Sunday, January 30th, 2022 at 3:27 pm and is filed under Hot Stocks, Member Only, Stock Indices. You can follow any responses to this entry through the RSS 2.0 feed. Both comments and pings are currently closed.