The Market Made A Strong Reversal Soon After Missiles Were Fired

Last Thursday the market gap opened down right at our projected NASDAQ downside price target around 12550, which fulfilled a 22% correction peak to trough and it’s also a 38% retracement of the entire rally from March 2020 to November 2021.  This price action was due to the fact that Russia declared war against Ukraine last Thursday.

The market has been selling non-stop in anticipation of a Russia/Ukraine conflict in the last two weeks while the Russians were getting ready for the war.  As soon as the missiles were fired, the selloff reversed with strong volume.  It also had a follow up day on Friday.  The price action of the last two trading days made a strong weekly close, but a follow up in this week is needed to secure the reversal to start a new weekly cycle.

In a private email to our subscribers last Thursday we stated that we were a little hesitant to call this reversal on Thursday as the final low of this correction because the time target of March 14th has not been met.  It’s too soon for the correction to be over in February.  It needs additional three more weeks to be clear of this situation.

Russia invaded Ukraine last Thursday.  Russia has met unexpected stiff resistance from the Ukrainian army.  The Ukrainian capital Kyiv has not fallen into Russian’s hands so far and both sides agreed to talks on Monday.  The United States and European countries have imposed severe economical sanctions against Russia, and Russia threatened the world with nuclear weapon.

This is not a good development.  The Russia/Ukraine conflict has the potential to escalate into a larger scaled war.  The futures is down on Sunday evening.  Let’s see how it opens on Monday.

Perhaps the Fed will take consideration of the war and re-adjust their thinking on tighter monetary policy in the March Fed meeting.

In near term, we will see a lot of volatility.  At this time we don’t see a long lasting bear market coming and we expect the current correction to end around March 14th, 2022.

Below is a weekly chart of the NASDAQ.  It shows the downside price target has been met. 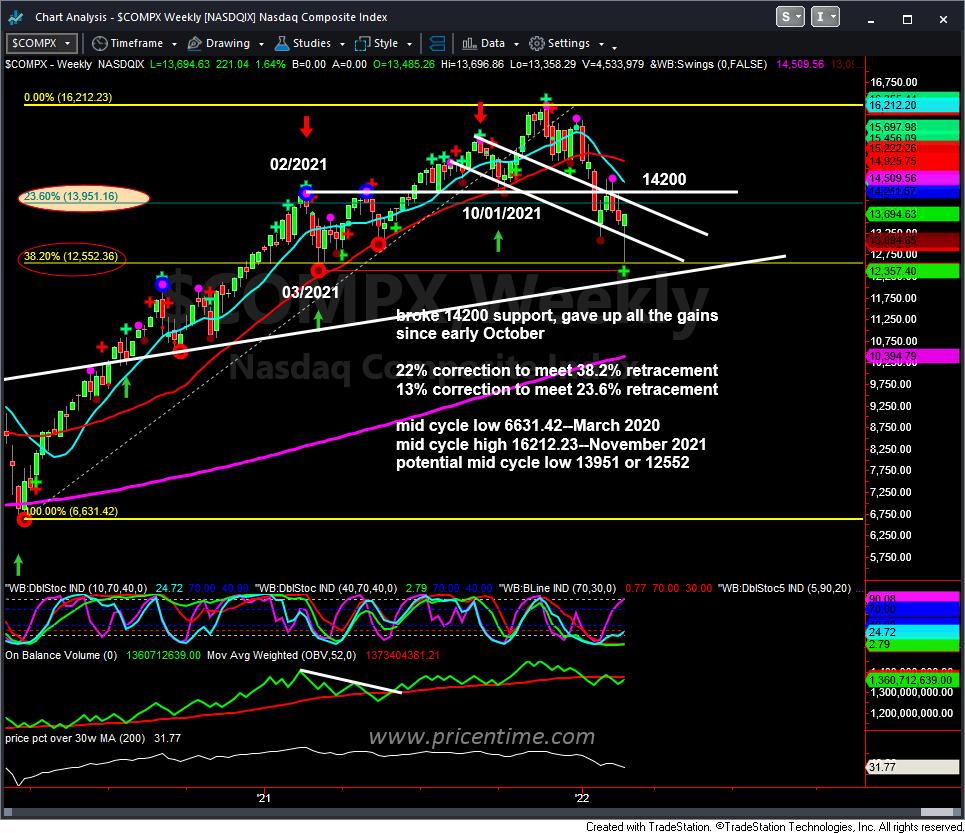 This entry was posted on Sunday, February 27th, 2022 at 9:53 pm and is filed under Forecasts, Member Only, Stock Indices. You can follow any responses to this entry through the RSS 2.0 feed. Both comments and pings are currently closed.