The Importance Of The February 24th Low

Before we start our weekly blog, we would like to send our thoughts and prayers to the Ukrainian people who are fighting a brutal invasion from Russia.  It’s hard to believe that we are watching the slaughtering of innocent civilians in real time on screen.  May the peace come soon to the brave Ukrainians and the world.

The dramatic intraday reversal with high volume and high percentage price movement happened on February 24th delivered a low, that is an important future reference.  Because this low occurred when the war in Ukraine first broke out, the market priced the worst possible impact of the war into the February 24th low and reversed from that low after digesting the event.  The market is a perfect discounting mechanism, the current price always reflects the outlook of the unknown future.  That is why the market has held the February 24th low so far even though Putin has been escalating the war with nuclear threat.

Last week all three major index plus the small cap Russell 2000 made a higher weekly high which made the February 24th low a swing low, or a weekly cycle low.  After a higher weekly high was made, the market was wobbly to close the week in a weak position.  The continued escalation in the war zone will put pressure on the market.

The high oil price is a form of tax that hurts everyone, especially the lower income people.  The sanctions against Russia essentially embargoed the Russian oil already because the banks were afraid to provide letter of credit for oil trades.  So if the US bans Russian oil and gas imports, there will be no big deal for the US.  Europe will be hurt badly if a global embargo against Russia oil is taken place.  Oil price will be much higher.  Since the March 2009 financial crisis low, the market has enjoyed a very low oil price and inflation was never a problem.  Now 13 years after the financial crisis, the market is facing inflation and war problems.  The macro conditions made us contemplating if this is a repeat of 2003-2007.  Oil stocks were major winners from 2003 to 2008.  It was the high oil price and high housing price that crashed the economy.  This time we have rising oil price and rising housing price too.  How much longer can the real economy afford these high prices?

It is no secret that high oil price will eventually cause a recession.  Without the high oil price and a war, our current 4-year cycle should be a normal one, meaning the second half of the 4-year cycle will produce a higher high in the next 12-14 months, now we are not so sure.  We have to watch how the market reacts to the February 24th low and how soon the first half cycle high (NASDAQ in November 2021, DOW and S&P 500 in January 2022) will be taken out.  But right now, the primary concern is the February 24th low.

The NASDAQ is 6 days into the daily cycle that started on February 24th.  It is contained under the 3-point down trend line currently.  In order to call this correction over, we need a day that is high volume (above 50-day moving average) and with minimum 2% price gain to follow up the gains made on the February 24th reversal.  Of course, this down trend line needs to be taken out during a massive rally.

Either a cease-fire, or a Fed decision will do the trick to cause a huge reversal of sentiment and price actions.  So we may have to wait a little longer to have some kind of resolution of the current uncertainties. 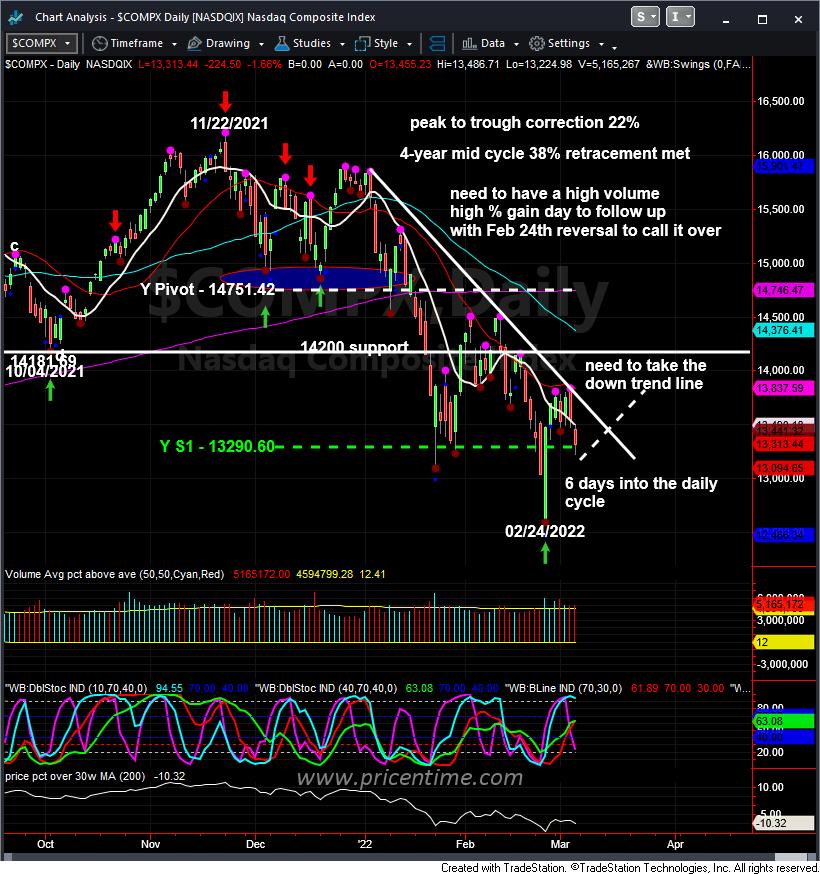 that will shape of the second half of the current 4-year cycle.

This entry was posted on Sunday, March 6th, 2022 at 6:49 pm and is filed under Forecasts, Member Only, Stock Indices. You can follow any responses to this entry through the RSS 2.0 feed. Both comments and pings are currently closed.