The Mid-Cycle Correction Is Over

As we anticipated, the NASDAQ made the correction low on March 14th.  The subsequent rally after the March 14th low was more than impressive to confirm that the 4-year mid-cycle correction is finally over.  Now with the market has to contend with the war in Ukraine, high inflation and tighter monetary policy.

That being said about the past rate hike cycle, you can see that we are at the very beginning of this rate hike cycle and the equities have some room to run before an inevitable correction.

Based on our prior experience, we expect the final winners of this second half of the 4-year cycle to be energy sector/commodities along withe mega tech stocks.  For the immediate reaction to the mid-cycle correction, the most oversold stocks (ARKK type of hyper growth stocks) will bounce from a deep bear market to meet their 200-day moving average.  After that, these stocks will flip around their 200-day moving average with the general market.  The true bottom of the ARKK type of stocks will occur with the general market’s 4-year cycle bottom which could be sometime around 2024.  So we will unload some of our growth stocks down the road to get into TQQQ to participate the rally to the end of the 4-year cycle top.  For the meantime, we are buying call options expiring in May with 200-day moving average as the price target for ARKK type of stocks.

We mentioned UPST ticker before.  Our scanner found APP ticker.  This is a mobile app marketing software platform hyper growth company.  It corrected 63% peak to trough, less than the 72% average correction, meaning it is a stronger stock that was corrected less than average.  It went IPO in 2021, but it recently announced $750 million stock buyback plan.  This company is financially strong to be able to buy back stocks.  It is profitable already and the price/sales is a little over 7.  Even though this hyper growth stock is healthy, but this type of stock is out of favor, so it is hard to expect this stock to rally to its former high in the second half of this 4-year cycle.  It still could rally to take over its 200-day moving average though.

Below is the NASDAQ daily chart that shows the daily and weekly cycle bottom are in.

This March 2022 low is a seasonal low, it is reasonable to expect the rally from this seasonal low to run into August through October, the seasonal high location. 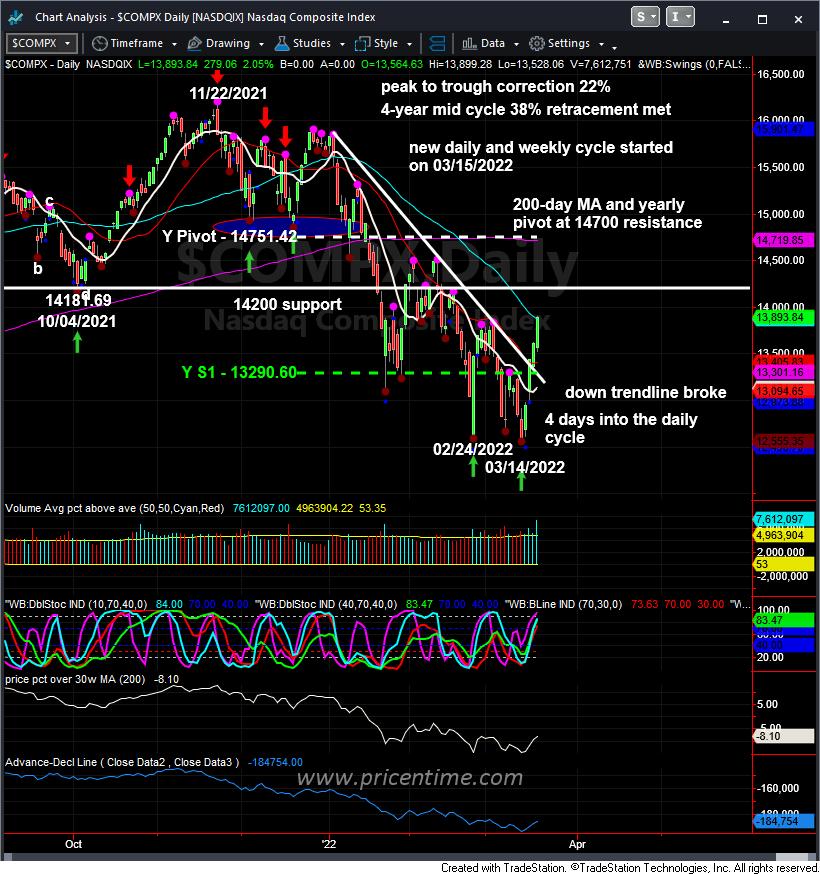 This entry was posted on Sunday, March 20th, 2022 at 6:20 pm and is filed under Forecasts, Hot Stocks, Member Only, Stock Indices. You can follow any responses to this entry through the RSS 2.0 feed. Both comments and pings are currently closed.