The Role of Oil In the Economy and Stock Market

Rising oil prices have contributed to every U.S. recession in the last 50 years.  Rising oil prices have also contributed to stock market peaks and resulting bear markets.  That was certainly the case during the mid-1970s when a tripling in the price of crude during 1973 (during the Arab Oil Embargo) led to a 50 percent stock market loss in the following year (1974).

Spikes in the price of crude also preceded or accompanied stock market drops during 1987, 1990, 1994, 2000 and 2007.  By contract, sharp drops in the price of crude have usually had a bullish impact on stocks.  That was the case at the start of the two Iraq wars in early 1991 and 2003, which helped launch new bull markets in stocks.  That’s why market leadership by stocks tied to oil is normally a danger to the stock market.  That’s also why we pay special attention to what the price of oil is doing.  Upward spikes in oil prices have preceded most stock market peaks.

At the depth of the pandemic low, the oil futures price briefly went to negative because no one wanted to take delivery of the oil, there was no place to store the oil.  WTI crude made a final low on April 26th 2020.  This low was re-tested in October 2020 right before the arrival of the vaccines.  In the beginning of February 2021, XLE (energy sector) started to outperform SPY and it has continued to outperform SPY until today.  We can’t over emphasize enough about this danger in the stock market.  Because of the high oil price, the Fed has been forced to raise interest rates. The Fed has promised to do whatever it takes to fight inflation.  Now the warning shot about the pending market peak and recession has been fired.  This is the first time since the 2008-2009 financial crisis low that we are dealing with inflation and high oil prices.  This pending stock market peak will have a very different characteristic than the prior peaks since the 2008-2009 financial crisis low.

How long can the economy afford the high oil prices along with higher Fed funds rate before it goes into recession?  The telling signs are in the stock market sector rotation.  When the stock market leadership transitions from energy to consumer defensive, it is time to get out market and perhaps start short positions.

It will need some time for the Consumer Staples sector to catch up with the Energy sector, therefore there are still some time left in the bull market before it reaches the 4-year cycle top.  The Fed was adamant about the strong state of the economy in March meeting, which provided cover for them to raise rates aggressively.  We will monitor this rotation carefully and will send signals out immediately when we see one.

Frequently the market participants talk about the interest rates and quantitative easing or tightening as the main tools the Fed uses to manage the economy and stock market.  Seldomly talked about is the Dollar.  The Fed has immense power to manipulate the Dollar, which is done covertly behind the curtain.  We wouldn’t be surprised to see the Dollar to strengthen from here to help the Fed taking down the commodities sector.  Typically the Dollar has a negative coefficient with commodities.  Now the Dollar has a positive coefficient of 0.82, meaning the Dollar and commodities are rising together.  If the Dollar gets stronger, it will eventually hurt commodities.  With uncertainties in Europe and the Fed raising rates, we can see the Dollar get stronger even without the Fed manipulating the Dollar.

If the Dollar comes out to aid the fight with inflation, we can potentially see the commodities calm down a little which will give more time for the stock market to run its 4-year cycle.

Right now, we see the stock market to rally into early May as minimum.  The bounce from the March 14th low is lack of animal spirit.  The story stocks like ARKK type of hyper growth stocks are in bad shape relative to the indices.  Semi-conductor is doing better than QQQ.  The shortage in chips and the secular trend in digitization are keeping Semi-conductor sector hot along with the cyber security area.  Other than the above mentioned areas, we don’t see any good stocks to get involved.

Again, we want to emphasize that the market is in late stage and be careful.  Keep your greed in control.

Below is the NASDAQ daily chart.  It is 9 days into the new daily cycle.  It is trying to make a beta daily cycle high, but meeting the prior support at 14200 as resistance.  It needs to take out 14200 before it can attempt 200-day moving average.  The S&P 500 closed above its 200-day moving average last Friday.  Thanks to sector rotations, the S&P 500 index is doing really well. 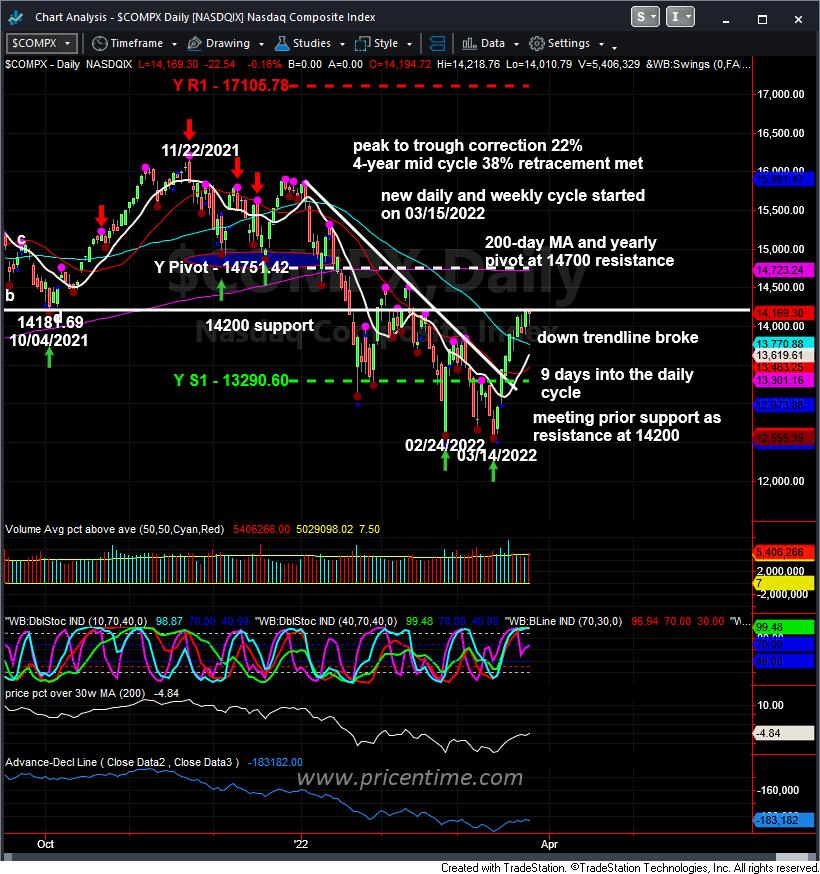 This entry was posted on Sunday, March 27th, 2022 at 7:43 pm and is filed under Forecasts, Member Only, Stock Indices. You can follow any responses to this entry through the RSS 2.0 feed. Both comments and pings are currently closed.