The Stock Market Is Climbing A Wall of Worry

After the DOW and S&P 500 both took out the 62.8% retracement of the recent correction and the NASDAQ took out 14200 level, the stock market had its first mild pullback since the March 14th low last week.  The White House announced that they will release one million barrels per day from Strategic Petroleum Reserve (SPR) for the next six months.  Other European governments also had similar announcements.  This coordinated SPR oil release caused oil prices to fall further after it has already made a failure high on March 23rd.

The falling oil/gas prices will help relieve the short term pain for consumers and it’s not a coincident that the SPR oil release will last all the way up to November, the mid-term election season.  One can never underestimate the political will from the administration to keep everything running smoothly in the mid-term election season.  We don’t believe the SPR oil release will provide a permanent solution to the energy shortage, but sure it will buy some time for the short term.  In turn, the lower oil/gas prices will prop up the stock market.  People will have more discretionary money to spend and feel better in general.

That being said about the potential of this rally, we need to remind our subscribers that this rally is the second leg in the 4-year cycle and it is more difficult to make money on individual stocks.  It is best to stay with index ETF because it’s very difficult to choose and stay in the winning sectors/groups while the near constant rotations between sectors/groups underneath the index is masking the danger for the individual stocks.  Leave this to the wall street professionals to pick the individual winners, sometimes the professionals get it wrong too.

After this 4-year cycle top, the mega tech FANG group probably will not come back to its former leadership status.  Amazon Staten Island warehouse just voted to unionize.  This is a sign for Amazon coming of age, Amazon is a legacy company now by have unions controlling its labor force.  Never mind the congressional investigations against Amazon’s malpractices.  Facebook and Netflix both mentioned competitions from TickTok in their earnings call.  Facebook doesn’t know what the company is anymore by changing its name to Metaverse.  Netflix is busy buying gaming companies.  Facebook and Netflix both knew that they are being disrupted and their old golden days are over.  Apple seems to be the last standing giant, but that could change if there is a conflict between China and the US.  This change will take time and we believe these mega tech stocks can still lead the market to the current 4-year cycle top.  What happens in the next 4-year cycle is what we are concerned about.

Below is the daily NASDAQ chart. The NASDAQ fell below 14200 but closed above it last Friday.  We believe the price low of this daily cycle probably has been made, but it might take a few more days choppy trading before it starts another daily cycle sometime next week.  The lower channel line should contain the price action. 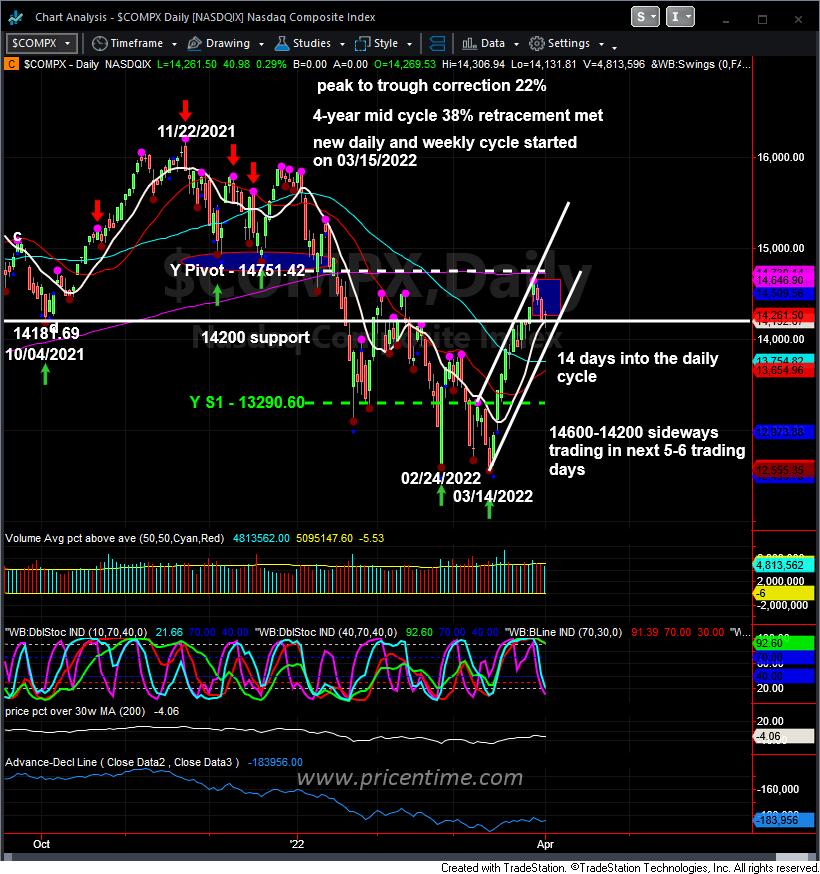 This entry was posted on Sunday, April 3rd, 2022 at 4:55 pm and is filed under Forecasts, Member Only, Stock Indices. You can follow any responses to this entry through the RSS 2.0 feed. Both comments and pings are currently closed.