Imminent Recession Or Not?

Since the Fed officials came out one after another to telegraph the speedier plan to raise rates and shrink balance sheet, the market responded with overwhelming negative sentiment.  As of now, the sector leadership since March 14th, 2022 is Consumer Staples (XLP up 9.78%) with  Energy (XLE up 7.11%), S&P 500 (SPY up 4.99%) and Semi-conductor (SMH -0.20%) trailing behind.  Semi-conductor (SMH) was leading the pack until the end of March, right before the Fed’s extreme hawkish bullying.  Clearly the market had a change of heart and is currently positioned for an imminent recession.

Is a recession imminent?  There are a lot of reasons to worry about the economy and the markets right now. A brutal European war and the resulting economic quarantining of a major commodity producer is disrupting global supply chains that were already tangled by 2 years of public health quarantines. Central banks are hiking interest rates and ending asset purchase programs, but the inflation their previous easy money policies helped stoke to 1970s levels hasn’t shown signs of going away. Meanwhile, the chance of policy error lurks as the Fed tries to raise rates far enough and fast enough to tame that inflation.

But, if history is any guide, then the clear answer is NO, we don’t face the risk of an imminent recession. The Fed’s plan to raise rates at a faster pace than they did in the last few decades poses a risk of slowing down the economy, say later on in 2023.  But for now, the US remains solidly in the middle of the business cycle, when the economy is growing and stock prices may continue to rise despite volatility.  Indeed, there are many signs that say the current economic expansion isn’t near its end.

What are rates signaling?

At the start of April, yields on 10-year US Treasury notes fell below yields on 2-year notes for the first time since 2019. Twitter and legacy media alike overflowed with claims that this “inverted yield curve” was a sign that recession was imminent.

It is noteworthy whenever yields on bonds that mature in the relatively near future rise higher than those of bonds that mature at a more distant point in time. However, history shows that an inverted yield curve forecasts recession much in the same way that autumn forecasts winter: While one eventually follows the other, nothing indicates when the snow will start falling. Indeed, the length of time between the inversion of the curve and the onset of recession has historically varied from as little as 6 months to as long as 4 years.

An inverted yield curve is typically a good indicator of a future economic slowdown or recession but notes that there are many parts to the yield curve and that not all of them are saying the same thing. While the inversion of the curve between yields on 2-year Treasurys and 10-year Treasurys triggered a tsunami of recession predictions on social and mainstream media alike, but many of those opiners were looking at the wrong part of the curve.  3-month versus 10-year part of the yield curve has historically been the best predictor of whether a recession is near. At this point, that part of the curve still remains quite steep and is not signaling a recession.

Below is the up to date 10-year treasury minus 3-month yield curve.  You can see the recessions (in shaded areas) after the yield curve went below zero.  At the moment, it is far away from zero.

While the curve is sending mixed messages, other data is giving strong and reliable signals that the US is unlikely to tip into recession anytime soon. The US remains in the mid-cycle phase of an economic expansion that began with the end of the brief COVID-19-provoked recession of 2020. History shows the mid-cycle can continue for years while recessions on average have lasted only 9 months.

But what about oil?

Part of the anxiety about what’s ahead is being fueled by high oil prices. That’s putting noticeable pressure on many people’s budgets, even though energy is not included in the consumer price index that media reports often equate with inflation. Despite the pain at the pump, though, energy prices matter less to the health of the economy than they did in the 1970s when they helped cause and prolong stagflation. Then, the US was an oil importer and the economy was still based on energy-intensive manufacturing. That left the US acutely vulnerable to higher oil prices after the Organization of Petroleum Exporting Countries (OPEC) cut off shipments to the US during the 1973 war between Israel and its neighbors.

More than 40 years later, the US can produce as much oil as it needs and price spikes or supply cuts are less of a threat. While the price of oil has been volatile over the past year, the chance of a 1970s-style oil shock appears minimal, according to Fidelity’s Asset Allocation Research Team. Indeed, oil prices would need to stay between $140 and $150 per barrel on a sustained basis to create the type of a shock that historically has been capable of tipping the economy into recession.

In last week’s survey from the American Association of Individual Investors (AAII) the bullish sentiment, based on expectations that stocks will rise over the next six months, dropped to 15.8%, down 8.9%.  As it turns out this was the lowest reading since September 4, 1992. There have been several extreme sentiment readings recently as the March mid-month reading on the University of Michigan Consumer Sentiment was 59.7. This was the lowest reading since September 2011 when recession fears were also growing after the downgrade of US debt. As it turned out stocks bottomed in early October of 2011.

We do not believe that the plunging sentiment suggests that will have a recession, but it does support the view that investors are already behaving like we are in a recession. This means the stock weakness should indeed be a buying opportunity.

What do the cycles say?

The NASDAQ daily cycle has hit 62% three times last week.  It is 23 days into the daily cycle.  In a typical 18-day cycle, the bottom timing band has been extended already, although it could be extended further out.  It needs catalysts to reverse the daily cycle.  APPLE’s earnings report date is April 28, Google’s earnings date is April 26th.  So next week could be a tough week for the longs.  The NASDAQ has the potential to re-test the March 14th low next week.  It is 4 weeks into the weekly cycle, the weekly cycle indicators are pretty weak and the advance/decline ratio is weak as well.

All in all, the market is pretty weak and volatile in short term.  But we don’t see an imminent recession on the horizon.  Yes, there will be a recession in later part of 2023 to early 2024 because the high oil price will get us there. 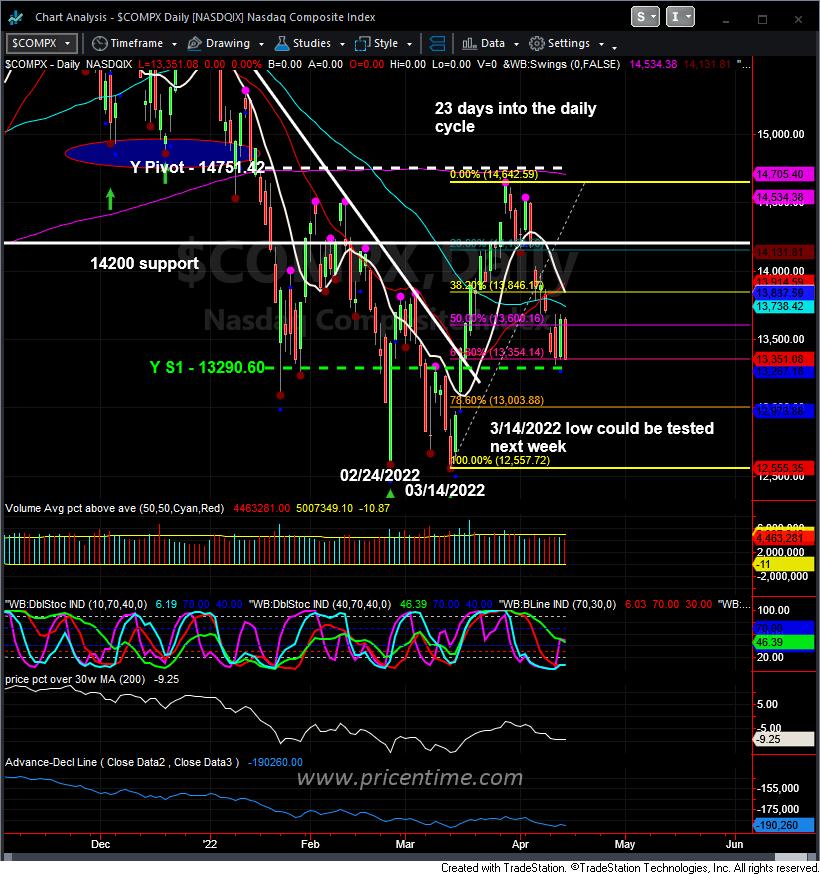 This entry was posted on Sunday, April 17th, 2022 at 7:54 pm and is filed under Forecasts, Member Only, Stock Indices. You can follow any responses to this entry through the RSS 2.0 feed. Both comments and pings are currently closed.