Will the March 14th Low Hold?

After the Fed Chair Powell gave statements about 50 basis point hike being on the table for May last Thursday, the market immediately turned bearish despite great earnings reports from TESLA and IBM.  The next day the market participants were talking about a shock-and awe hike of 75 basis points in pre-market and the market had a big selloff on Friday.

The DOW led the frenzy selloff to lose 2.82% with the S&P 500 and NASDAQ losing 2.77% and 2.55% respectively on Friday.  Amazingly, ARKK ETF only lost 1.65%.  ARKK being the most hated sector ETF, it should be the leader on the downside.  Is this a bullish divergence?  One day price behavior is too soon to tell, but definitely it is a small positive in the selloff.

While the market was crashing on Friday, Cleveland Fed President Loretta Mester said she’s in favor of raising interest rates by 50 basis points, perhaps multiple times, but wouldn’t favor going higher than that.  Mester also called the Fed’s pivot from the historically high levels of accommodation during the pandemic era “the great recalibration of monetary policy.”  So the Fed officials are watching the market activities very closely.  Perhaps the market participants are on steroids and overdoing the tightening of the financial conditions for the Fed through the relentless selloffs.

Just before the selloff, the airlines have reported great earnings as people are eager to travel as the re-opening after Covid is still on going.  How could the economy be in recession if the airlines are doing great businesses?  Consumers apparently are in great shape so they can still afford travel and vacations.

France’s Emmanuel Macron looks set to comfortably beat his far-right rival Marine Le Pen in Sunday’s election, securing a second term as president on his pro-business and pro-EU agenda.  This is a good news for the market.  Not sure if the market will use this excuse to rally on Monday.  Prior to the French election result, the market was quite nervous as the far-right Marine Le Pen is looking to reverse Macron’s policy and is anti European Union.  In a time of war, it is bad to make a complete reversal on policies that would affect the West’s strategy on dealing with Russia.

Next week is an important earnings week.

Coco Cola will report on Monday which can tell if the companies can pass through the high cost to consumers, or the strength of the consumers in the face of a very high inflation.

Hopefully the market can see through the period of uncertainty and get back to the strong fundamentals.

One more thing before we get on the charts.  The growth engine FAANG group that lasted more than a decade is no longer invincible.  Netflix is no longer a growth company.  The future of streaming business is destroyed through competition, in our view.  Facebook is dead and the Metaverse has to prove itself.  This leaves room for future leaders.  We believe the next decade belongs to data/web 3/EV, etc..  There are great data companies are on sale on.  If you have a little longer time horizon than Wall Street, you should take advantage of this rate hike fear.

Below is a NASDAQ daily chart.  The selloff is very close to the March 14th low.  The market will try its best to test it.  Let’s see if it can get there. 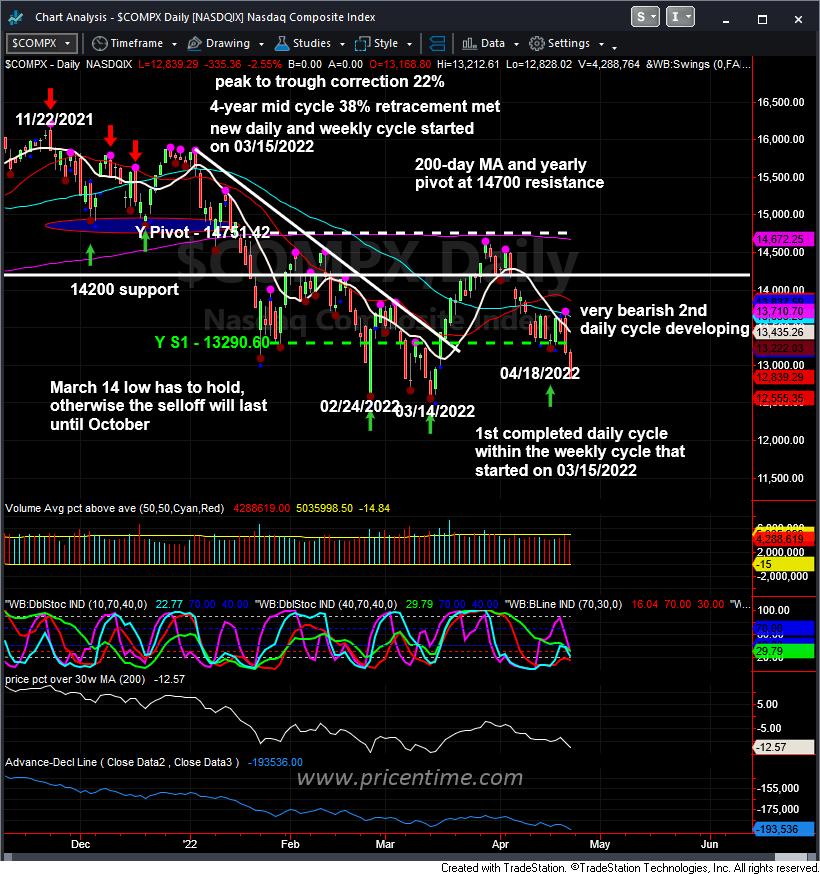 This entry was posted on Sunday, April 24th, 2022 at 6:30 pm and is filed under Forecasts, Hot Stocks, Member Only, Stock Indices. You can follow any responses to this entry through the RSS 2.0 feed. Both comments and pings are currently closed.