Everyone Is Looking for That Panic Flush In The Market

Last week major retailers such as Walmart and Target released bad earnings for Q1 and weak forecast for Q2 2022.  Rightfully both stocks were punished severely along with the entire the market. All three indices made a new low last Friday, but the market was able to crawl back to close above their perspective daily pivot range.  Buyers stepped in around 130pm to push the indices to close in a positive posture.  It was not a complete reversal of the bearish day trading structure, but it was attempting to make a bottom last Friday.

The volatility index VIX index closed below 30 last Friday while traders have been looking for a day with VIX hitting 40 to conclude the capitulation.  The market is trying to bottom, but buyers needed VIX to hit 40 to jump in the market.  We believe the current bottoming process will not make the final low of the 4-year cycle, therefore a flush/capitulation is not needed to make this bottom.  The fact that the market closed above May 12 low is a positive sign that shorts are losing momentum on the downside.

It costs money for shorts to keep their short position, so if the market doesn’t fall down quickly from here, shorts will be forced to cover.

A slew of retailers will report earnings next week.  If the market reacts positively to the retailers earnings next week, then the market is believing that the consumers are in great shape and recession is not in the immediately horizon.  Perhaps the longs will step in to scoop up tech stocks which are in deep value zone (traded in less than their 5-year valuation average) and shorts will start to cover.  Despite the market made a new low last Friday, we are not changing our view that a bottom is nearby and we are still positioning a sloppy rally into summer.

The hyper growth stocks typified by ARKK ETF had a similar crash like the DOTCOM bust.  That’s why we studied Amazon and Apple to see how they were treated during that cycle.  The ARKK ETF may not bottom until 2023, but some of the best of the hyper growth stocks may have made their price lows, or very near their price lows.  The new bullish trend will not start until after the 4-year cycle bottoms, so if you are an investor with a longer view, it is safe to pick up some of the growth stocks that are on sale.  Just remember that the bullish cycle in those stocks will not start until 2023.  Alternatively, you can trade around those names while you are waiting for the bullish trend to return.

The FAANG group has enjoyed market leadership since the financial crisis low in March 2009.  During the rise of the FAANG group, inflation was not an issue.  The market had a goldilocks time.  Apple being the best FAANG stock, its relative performance against S&P 500 topped in December 2021.  The market leadership was rotated to energy.  The leadership in energy is causing all sorts of problems in the market and economy.  Eventually energy leadership will be decimated because a long term energy leadership is not sustainable.  After the valuation reset, will the FAANG group come back to be in leadership position again?  We don’t believe so.  The FAANG group leadership has been decimated by the new market dynamic.  The next bull cycle will be led by today’s hyper growth stocks and that’s why we don’t mind to get long with some of the best data/cloud/cyber security growth stocks.  Also don’t forget the best semi stocks such as NVDA and AMD.

It is 12 weekly bars into the current weekly cycle that started on 02/25/2022.  The prior weekly cycle lasted 20 weeks, so if this weekly cycle finishes sooner than the 18-week average, it is normal.

We don’t have a crystal ball about the timing of a recession, but we do know that:

For these reasons, we are betting on a reversal of the stock market in the 1-2 weeks, a temporary bottom without the panic flush that traders have been looking for. 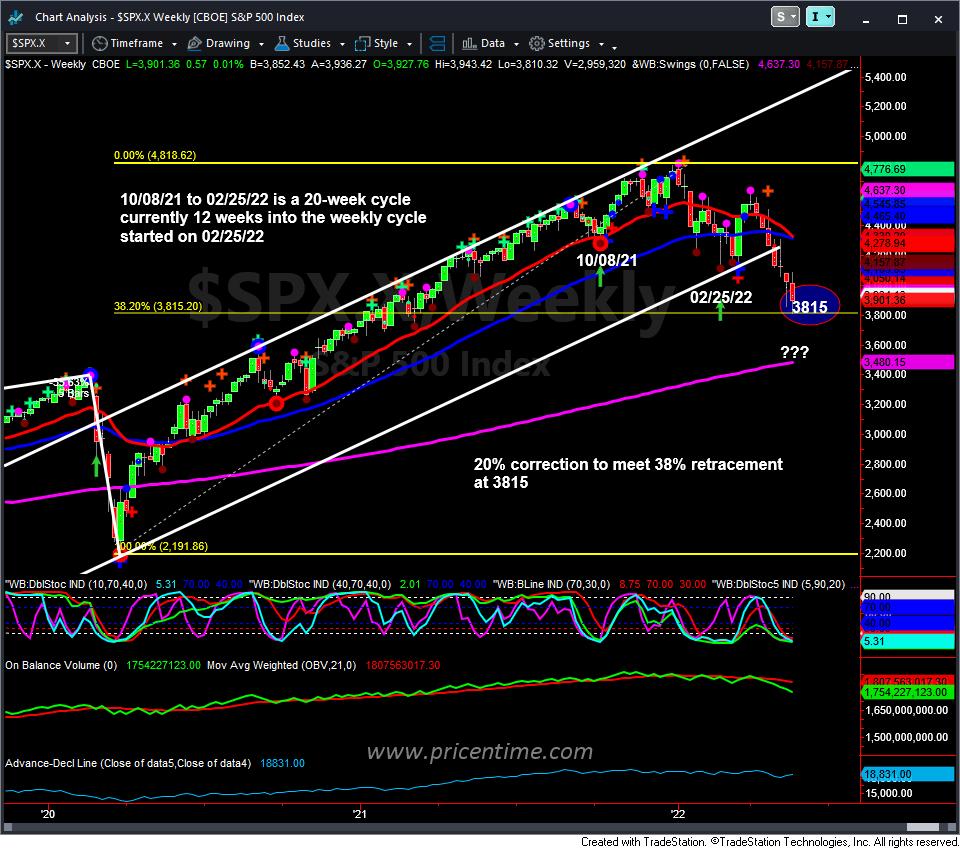 This entry was posted on Sunday, May 22nd, 2022 at 7:30 pm and is filed under Forecasts, Hot Stocks, Member Only, Stock Indices. You can follow any responses to this entry through the RSS 2.0 feed. Both comments and pings are currently closed.