The Cost of Money and Why the Fed Fails Frequently

The cost of money determines asset price.  That’s why the market pays extreme attention to the Fed.  Every single Fed decision affects the cost of money.

The main tools the Fed uses are fed funds rate, asset purchasing/selling and the US currency.  Since the 2008 financial crisis, the Fed has sprinkled money on every problem we have had.  The helicopter money has worked until this time.

This time the highest inflation in the last 40 years is forcing the Fed to drain the easy money in the system at a faster pace than it was injected into the system during the pandemic.  This is a seismic event that are causing the bond holders and the interest rates sensitive equities losing a lot of money.  Back in 2021 the Fed was insisting on inflation being transitory and was very slow at adjusting the easy money policy.  Now the Fed admitted in March that inflation is not transitory and too high to not do everything possible to take it down.  This is a man-made blunder.  If the Fed acted sooner, perhaps the consequences of the Covid extreme easy money policy would not be so painful now. It is easy to point the finger now after the fact, but it was very difficult for the Fed to forecast high inflation back in 2021 because we have not had inflation problem since the 2008 financial crisis.  After all, members of the Fed is made of real people who can’t foretell future.  The Fed is only reactive, not preemptive to each and every situation.  Therefore the boom bust economic cycles repeat every few years.

Last Friday we had a ugly CPI data release, inflation rose 8.6% in May, the highest since 1981.  This is a new high in inflation data, so inflation is not peaking as many hoped.  The Street is now hoping the Fed would raise 100 basis point in June meeting to shock the system to show the Fed is in control of fighting inflation.  Wishing for an extreme hawkish hike in June is a new mindset which shouldn’t surprise anyone.  The Street realizes that the high oil price combined with strong employment data is a recipe for pain for bonds holders and equities (except oil related stocks).

The relief rally can’t catch a break due to the unrelenting inflation so the only hope is to have the Fed to do something extreme to shock the economy to slow down inflation.

We think the energy sector ETF XLE could be making a temporary overbought top. The energy bull market is not over anytime soon.  This is only a temporary top.

Comparing to the last two oil bull markets in 2002-2008 and 2009-2014, this oil bull market has the biggest gain in the shortest amount of time.  There are huge foundational events (war and ESG forced under investments for many years and Covid) driving up oil price, but still it can’t go up unlimited.

The technical reasons XLE is at top:

3.  XLE has been running up against the back drop of a broad correction in the indices for 6 months, this divergence can’t last forever.

4.  If the indices continue to go lower from here, XLE will go down as the threat of recession will take oil down.

Despite all the topping signs, XLE could still continue to go higher.  It is more difficult to catch the top for a trend reversal than following the trend.  So we are going to buy some XLE puts in the next 1-2 days.  The risk is limited to the premium of the puts.  Since XLE has been trending for so long with low volatility, the puts are quite cheap.

Below is the XLE monthly chart.  You can see it is pressing up against the white channel line and almost up to the yearly resistance level 4.

We need to see how the market reacts to the Fed June meeting. 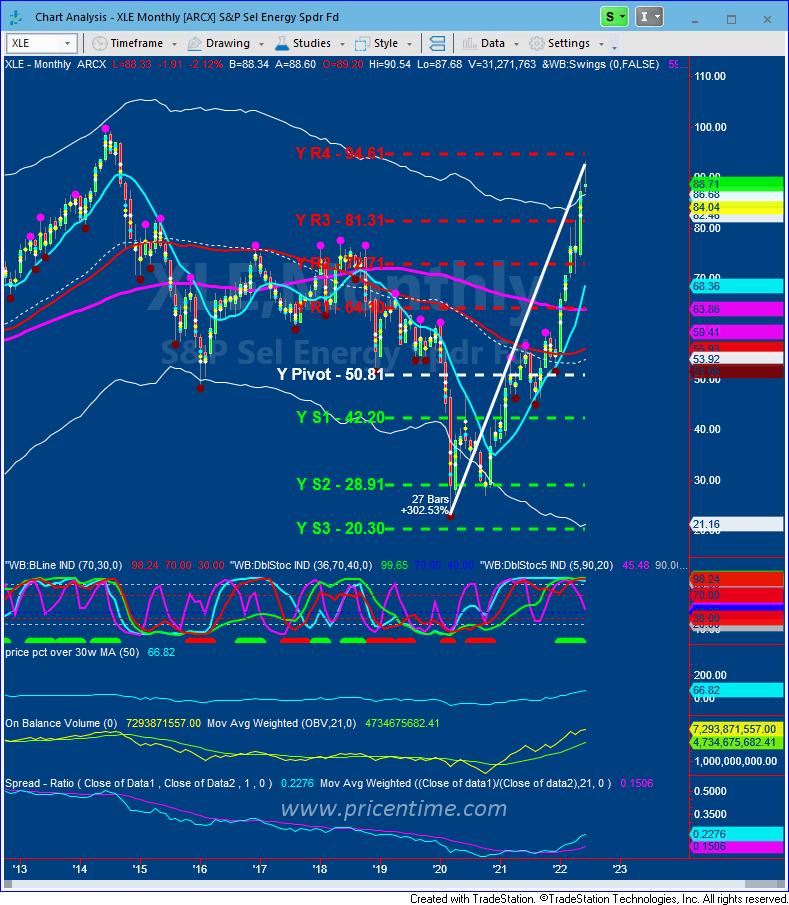 This entry was posted on Sunday, June 12th, 2022 at 8:36 pm and is filed under Forecasts, Hot Stocks, Member Only, Stock Indices, Trade Recommendation. You can follow any responses to this entry through the RSS 2.0 feed. Both comments and pings are currently closed.