Finally the Relief Rally Had a Follow Through Day

Finally the indices had a strong follow through day last Friday which cemented a weekly cycle and daily cycle bottom!  The rally from the 06/17/22 low is very similar to the rally out of the 03/14/22 low.  The Fed deliberately killed the rally out of the March seasonal low by communicating clear intentions to tighten financial conditions to combat inflation.  The perceived and real tight monetary conditions caused the commodities to crash in early June.

Energy ETF XLE had a crash that took out three previous months’ low.  This correction in XLE has a potential to go further down to reach its 200-week moving average at around 55.25.  The rotation out of the energy sector is another reason why the indices rallied.  The high commodities prices were the direct cause of high inflation which put pressure on the Fed and the stock market.  Now the crash in commodities is predicting the peak inflation data is about six weeks away.  We probably would get a better inflation headline data in July which will give the Fed a break to go full on hawkish.

Technically, the extreme bearish sentiment caused the market to turn around after the post June Fed meeting tantrum. We expect the market to stay in short term bullish trend for the next 8 trading days minimum.

We still see the market will some how rally into late Summer and then have another selloff to make a seasonal low in October-November time frame.

So stay calm and ride with the Summer volatility.

We apologize this blog being a short one as we are upgrading our computer systems that not all apps are fully working at this time.

You can see that the rally out of the March low was strong until the Fed deliberately killed it.  This time the relief rally would be more durable because the additional three months spent in correction has adjusted the price to reflect the new reality.  The time aspect is rightfully in better position than in March. 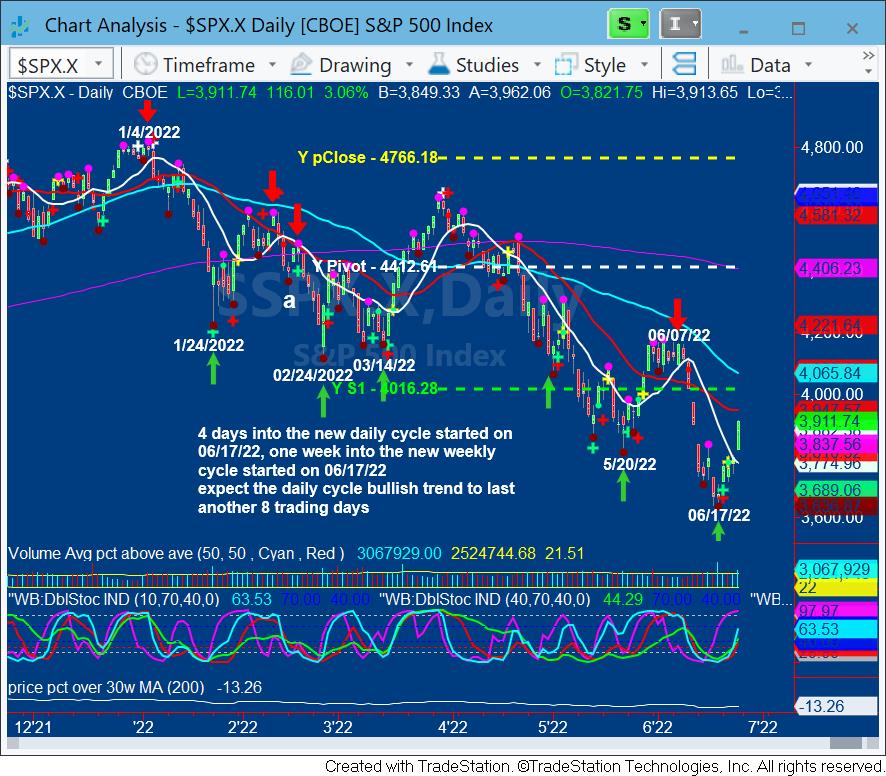 This entry was posted on Sunday, June 26th, 2022 at 9:47 pm and is filed under Forecasts, Stock Indices. You can follow any responses to this entry through the RSS 2.0 feed. Both comments and pings are currently closed.