The May 20 Low Was Tested Last Week

Following the post June Fed meeting tantrum, the market rallied to jump over the May 20 low in the week after.  But last week the market encountered a selloff that tried to reverse the post June Fed meeting relief rally.  The bears almost won the battle to cause another leg down, but it failed due to the bulls emerging in the late Friday afternoon trading.  The surge in the late Friday day trading produced an intraday bullish signal that should cause the market to follow through in the next trading session.  But the surge was in low volume, so there is a still chance that the market would continue to fall.  But right now, the May 20 test on the downside has failed, meaning the market survived the test by closing above the May 20 low last Friday.

If the post June Fed meeting low holds, meaning no new lows for the time being, it doesn’t mean that the market will start to trend immediately.  The market could be in this complex bottoming process longer than anyone’s tolerance.  The March 2020 low was an event driven V-shaped fast bottom, the next bottom could be long and complex because the major bottom patterns alternate among themselves.

The NASDAQ made a higher low in 2009 than the low in 2002 while the S&P 500 and DOW made their lower low in 2009.  So the S&P 500 and DOW had a 13-year bull run (2009-2021) while the NASDAQ could be counted as a 19-year bull run (2002-2021).  The bull market finale was fueled by the extreme easy money induced by the COVID pandemic.  Easy money has been the hallmark of the bull market since the financial crisis. The emergence of Bitcoin was a direct result of anti Fed easy money sentiment.  During the bull market finale (March 2020-Novermber 2021),all sorts of speculative instruments had their day under the sun.  Besides the horrible speculative behavior towards the end of the bull run, super low interest rates and QE did finance a great tech boom that produced tech giants such as Apple, Amazon, Google and Facebook.  In addition to the notable tech giants, there have been many tech companies silently changing how we live.  The emergence of Zoom is a great example.  If we didn’t have all the tech in place, our experience with the COVID pandemic would have been much more difficult.  For a certain percentage of the general population, COVID pandemic was non-event because the e-commerce and internet companies such as Zoom carried the world through the pandemic.  Of course, the mRNA technology based vaccine is the direct reason why the West is finished with the COVID pandemic much sooner than China.  China didn’t have mRNA technology and refused to import mRNA based vaccine from the US.  Therefore China is in the never ending fight with the COVID pandemic.

The pandemic induced supply chain disruption and the war in Ukraine created a perfect inflation storm that forced the Fed’s hand.  The Fed is forced to tighten financial conditions to slow down the economy to kill the high demand in commodities.  The Fed has never succeeded in the past in fighting inflation without causing a recession.

Judging from the market’s inabilities to even have a little durable relief rally after six months selloff, it’s fair to say that the market is really weak and is totally consumed by the worries of a recession.  The recent correction in energy ETF XLE is showing the market is highly worried about a recession.  The semi-conductor ETF SMH just made a new low while the indices haven’t done so.  The crash in cryptocurrency has no end in sight.  All in all, this is a bear market in big picture.

However, the most hated growth stocks such as ARKK ETF hasn’t made a new low with the general market in June.  This could be a message from the market that the severe selloff in growth stocks perhaps has found a bottom, but because the general market is so weak, even the stocks with a confirmed bottom can’t trend right now.  This phenomena happened during the bear market in 2000-2002.  Apple and Amazon bottomed 1-2 years ahead of the NASDAQ, but Apple and Amazon were not able to trend until after the bear market was over in October 2002.

If you are holding the hated growth stocks, if the companies’ balance sheets are strong and the business is still growing, then it doesn’t make sense to sell them now at such low price.  Just put it aside, the bear market will eventually over and a new bull market will start with new leaderships.

It has to happen in the next 3-5 days, otherwise this daily cycle will have a lower high which is bearish for the weekly cycle.

The 10-year bond yield has topped and is on the way down.  The 10-year treasury yield coming down is an indication of fearing an imminent recession.  This signal perhaps would convince the Fed to ease off on hiking.  The Fed could also be blind to the signals as they are always behind the curve.  The Fed is never preemptive.  The Fed is made up with real people who often make mistakes.  The Fed could make mistake this time to hike the economy into a recession and the stock market suffers from it. 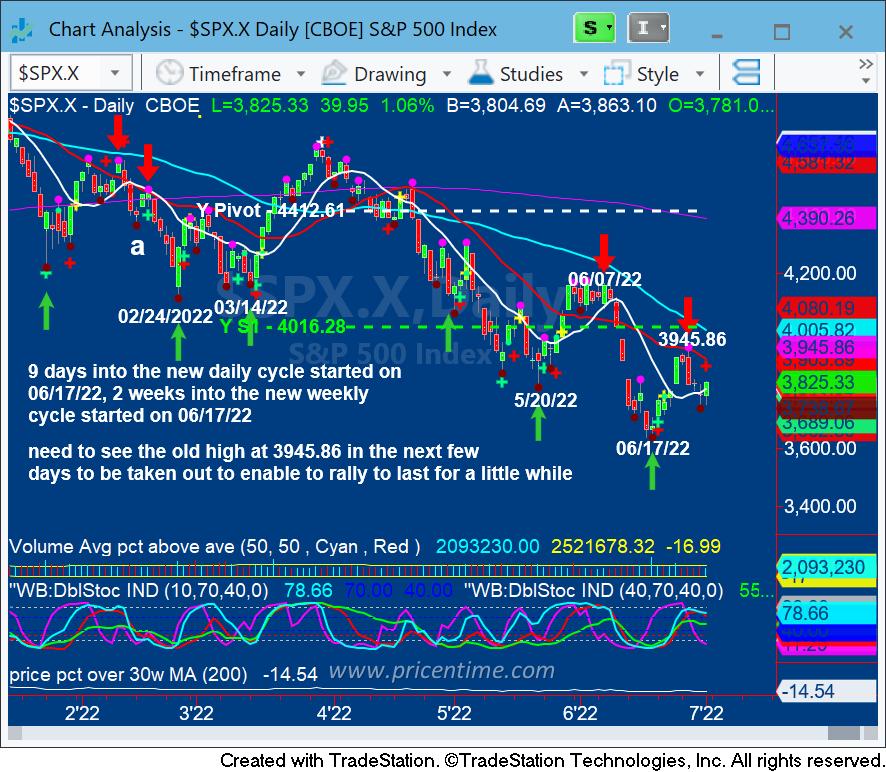 This entry was posted on Sunday, July 3rd, 2022 at 8:11 pm and is filed under Forecasts, Hot Stocks, Member Only, Stock Indices. You can follow any responses to this entry through the RSS 2.0 feed. Both comments and pings are currently closed.