How Long Can the Market Fight the Fed?

Ever since the June 17 bottom, the market has made up its own mind.  It didn’t matter what the hawkish Fed officials said about their resolves to fight inflation, the market plowed ahead as if everything is fine.  The S&P 500 met its maker at 200-day moving average on August 16, 2022.  The bulls were able to pierce through S&P 500 200-day moving average, but couldn’t close above it that day.  Subsequently, it has entered a mini selloff in the last three trading days.

Next week the Federal Reserve policy makers will meet at Jackson Hole, Wyoming to discuss broad policy issues and Chair Powell will speak on August 26 at 10 am at the Jackson Hole conference.  This is a highly anticipated speech that could signal how high U.S. borrowing costs may go and how long they will need to stay there to bring down soaring inflation.  There will be four trading days before the Jackson Hole speech next week.  Four trading days are a very long time for traders, we should expect some volatility throughout next week.

Technically, it is 9 weeks into the current weekly cycle.  If this weekly cycle is bearish in nature, then the 9-week mark is right in the top timing band.  The catalyst from the Jackson Hole speech should take the market down immediately.  But we are not so sure about the bearishness of this weekly cycle.  Why not?  Because the market is currently above its 200-week moving average, meaning the market is NOT in a structural bear market.  This is only the first bounce from the mid 4-year cycle low (June 17 low), it could have more gas in the tank for the bulls.  If the market continues to rally after the Jackson Hole speech, then the rally could drag into labor day holiday weekend.

If we have to pick a position, then we would bet that the market will rally into early September.  We think the odds of a continued rally after the Jackson Hole speech is greater than 50%.  This is a bear market rally, but it will last longer than the bears can believe.  When the market doesn’t come down as the bears anticipated, they are forced to cover.  The shorts covering is why a bear market rally lasts longer than logically expected.

Below is the S&P 500 weekly chart.  The daily cycle oscillator has turned down, the next four trading days should be sideways to down.  Let’s see how the market reacts to the Jackson Hole speech. 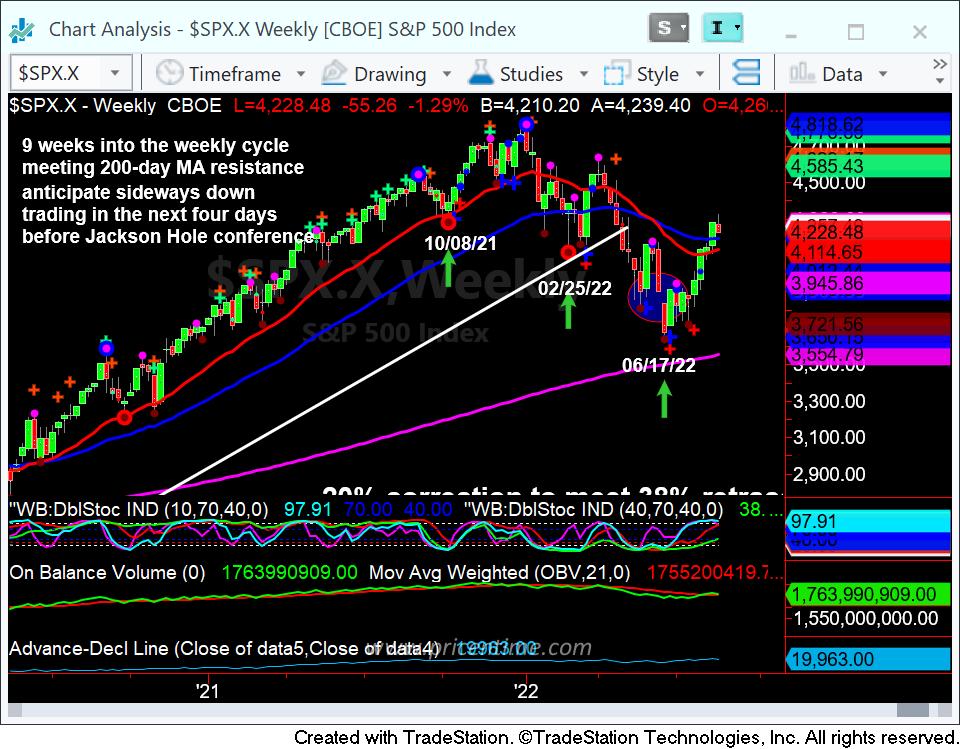 This entry was posted on Sunday, August 21st, 2022 at 7:18 pm and is filed under Forecasts, Member Only, Stock Indices. You can follow any responses to this entry through the RSS 2.0 feed. Both comments and pings are currently closed.