The Fed, the nation’s central bank, influences the business cycle by targeting inflation and unemployment with targeted rates. It uses tools designed to change interest rates, lending, and borrowing by businesses, banks and consumers.  In September 2021 Fed meeting, the Fed labeled raging inflation as transitory and telegraphed the market that the Fed was not even thinking about raising rates in 2022.  Guess what happened?  The raging inflation was not transitory.  The unforeseen Ukraine war exacerbated the inflation situation that forced the Fed to react with full force to raise the Fed funds rates by 75 basis points twice so far.

The inflation data on the ground are improving, the price index in the recent ISM report is showing the biggest decline in 70 years and the real estate prices are falling nationwide.  These real time data points will not be shown in the monthly CPI report until months later, but the lagging headline CPI number is what the Fed’ s decisions are based on.  During the Fed Chair Jackson Hole speech, the Fed is hell bent on raising rates until the “pain” is everywhere.  The Fed didn’t have a clue in September 2021 about what was going to happen in 2022, do you think they will have the crystal ball to see through 2023?  No, we don’t believe the Fed has a clue about 2023!  All the Fed can do is to be reactive.  Because the Fed is the most powerful central bank in the world, any reactive measures from the Fed can cause enormous amount of pain everywhere.  The rising interest rates caused the bond holders far more pain than the equities holders.  The traditional 60/40 portfolio suffered the worst decline in history.  The safety in the bond market was nowhere to be found in 2022.

The Fed officials are real people just you and I.  Real people don’t normally have the abilities to foresee the future regardless how much data they have, so they typically react to situations.  Smart real people can react quicker than the average people.  We believe the Fed officials are smart professionals who can react to situations correctly, but they tend to over react to the extremes due to external pressure.  For example, they made mistake for calling pandemic induced raging inflation as transitory.  Now they are going to over react to the inflation and cause a painful bust everywhere.  People is the real cause of boom-bust cycles.

Back in March 2022, the Fed officials deliberately made hawkish statements to crush the equities market which resulted a three-month selloff to produce a June low.  The June low was made in the most negative market breadth in the last 70 years.  The oversold bounce from the June low was promptly crushed by the Fed through the extreme hawkish tone in Jackson Hole speech.  You can see the traces of the very apparent market manipulation by the Fed.

Yes, fighting the Fed is a fool’s game.  So right now investors should look for cover and wait.  At some point the Fed will be forced to change policies and the market will respond.

Below is the S&P 500 weekly chart.  It is 11 weeks into the current weekly cycle.  It is clearly in a downtrend.  We expect the weekly cycle to bottom around mid October.

On the S&P 500 daily chart (not shown here), the daily chart is about to turn up even though the market turned negative last Friday afternoon before the long holiday.  Traders didn’t wanted to hold positions over the long weekend.

We expect that any short term bounces will be sold.  Please don’t open long positions until at least October. 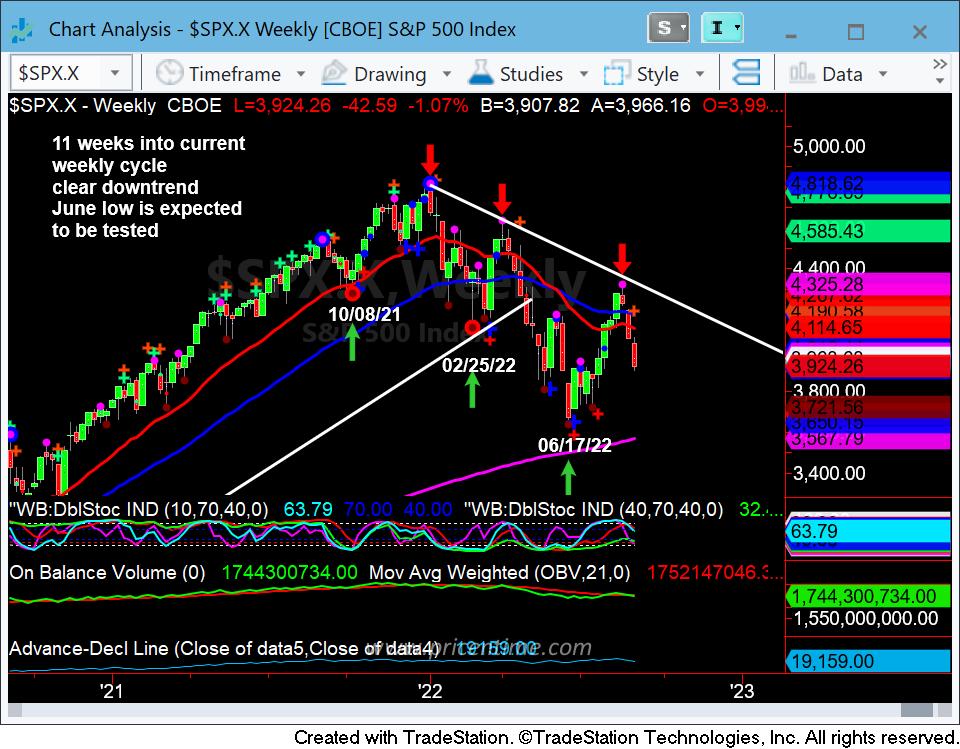 Three forces combine to cause the boom and bust cycle. They are the law of supply and demand, the availability of financial capital, and future expectations. These three forces work together to cause each phase of the cycle.

This entry was posted on Sunday, September 4th, 2022 at 10:27 pm and is filed under Forecasts, Member Only, Stock Indices. You can follow any responses to this entry through the RSS 2.0 feed. Both comments and pings are currently closed.