The Shorts Had to Cover Last Week

The S&P 500 cash index hit its 61.8% retracement of the June low to August high rally on September 1st.  Then after the Labor Day holiday the bears tried to crash the September 1st low again.  The bears were only able to make a nominal low on September 6th and promptly reversed from the 61.8% retracement.  This reversal is mainly short covering and completely technical, the macro conditions are still the same.

The next CPI reading will be released on Tuesday September 13 at 8:30 am.  The headline CPI reading should be trending down as energy prices have come down significantly, but the Fed will not make the September rate hike decision based on this reading.  The Fed wants to see a few months of CPI data trending down. The Fed is afraid to call the end of the fight against inflation too soon and they are willing to risk a recession.  The market has priced in a jumbo 75 basis points rate hike in September at the moment.  Perhaps this is why the bears couldn’t crash the June low so far.  All the relevant information is out in the known, the bulls are not that scared.  Probably the bulls believe that the Fed is not going to cause a panic in the stock market right before the mid-term election.  Regardless the reasons, the bulls should take comfort that the current bear market is not a structural bear market that is caused by debt either in the corporate sector or the consumers.  Also the rest of the world is doing very poorly, Europe and UK are in recession and China is still muddled in a never ending zero Covid game.  The strength of Dollar is attracting funds from the rest of the world.  All the external reasons will provide support for the US stock market despite how terrible everyone feels about the domestic fight against inflation.

In the S&P 500 daily chart, you can see the bounce from 61.8% retracement clearly.  It is 3 days into the current daily cycle and 12 weeks into the current weekly cycle.  We will see some trading around the CPI data release next week. Other than that, it is a game of waiting, waiting for the Fed to be done with the manipulation of the monetary policies. 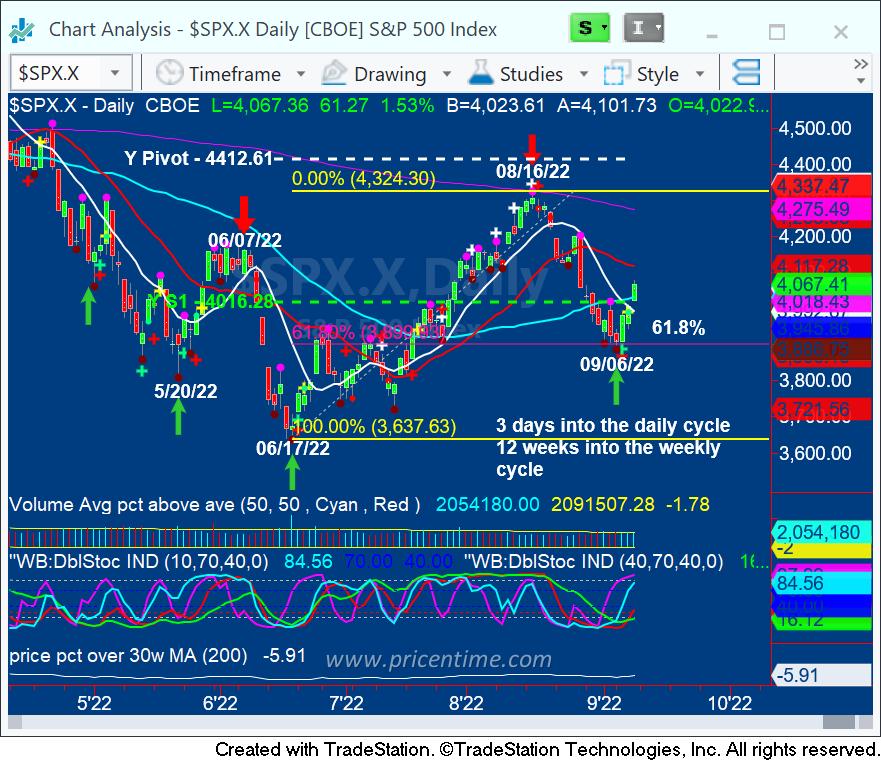 This entry was posted on Sunday, September 11th, 2022 at 8:32 pm and is filed under Forecasts, Member Only, Stock Indices. You can follow any responses to this entry through the RSS 2.0 feed. Both comments and pings are currently closed.