Since the extreme hawkish September Fed meeting on last Wednesday, the markets have been in shock.  The 2-year and 10-year treasury yields have gone parabolic while the equities in every sector sold off hard. The DOW took out its June low while the S&P 500 and NASDAQ held their respective June low.  The 10-year treasury yield gap opened to a 12-year new high last Friday, but it failed to continue to press higher after the opening gap.  In fact, it formed a trend reversal trade setup, meaning the 10-year treasury yield could be going down from here.

The market sentiment is extremely bearish, some are calling the 10-year treasury to reach 4%.  It closed at 3.697% last Friday.  So for us to call the 10-year treasury yield top is against main stream, but the chart is presenting the setup clearly.  We have to follow what the chart is telling us instead of listening to other people.  In fact, some model suggests that the economy can only afford a 2.2% 10-year treasury yield, meaning the economy is slowing down rapidly.  The Fed is projecting the Fed funds rate at 4.4% by the end of 2022 and 4.6% in 2023.  The Fed has gone mad!  The Fed lost its mind when they coined transitory inflation in 2021 and was too slow to raise rates.  The Fed lost its mind again when the economy and inflation are falling rapidly at the same time while raising rates mad as hell.  The Fed single handily engineered Covid boom and bust.

For a trend reversal trade setup, the first requirement is a market that has been in a significant uptrend or downtrend for a sustained period of time.  A couple of days is not long enough.  A couple of weeks may enough time, but a month is even better–and six months is better yet.  The second requirement is to have a gap opening in the direction of the trend.  The 10-year treasury yield met the two requirements last Friday.  Let’s look at the 10-year treasury yield intraday chart to see what happened.

What behind the scenes: The 10-year treasury yield gapped higher on the opening because the shorts were throwing the towel.  They are willing to pay up to whatever it takes to liquidate in the first 10 to 15minutes of trading.  That’s what made the market gap open higher to begin with.  At this point, the professional traders step in as sellers.  They probably have been riding this trend and now are taking the opposite side of those losers and closing out their long positions, and some are probably getting short as well.  The unusual thing that occurs here is that even though the shorts have thrown in the towel as evidenced by the gap-higher opening, the market shortly after the opening traded lower as these professional liquidate their longs and initiated shorts.

Typically, after the first wave of selling, the market peters out.  As soon as the market begins to recover, traders who have become accustomed to the bull trend that has existed in the 10-year treasury yield for so long will either initiate new longs or at least get out of their shorts.  The trend has ingrained in people’s heads that it doesn’t pay to be short.

The short-covering rally from a to b in the intraday chart, couldn’t even push the market back into the opening range (dotted dark green lines).  The second wave of selling b to c made a lower low at c.  The perfect short is at b, failed to enter the opening range.

This 15-minute chart is a picture perfect trend reversal trade setup.  Let’s see if it has follow through in the next few days. 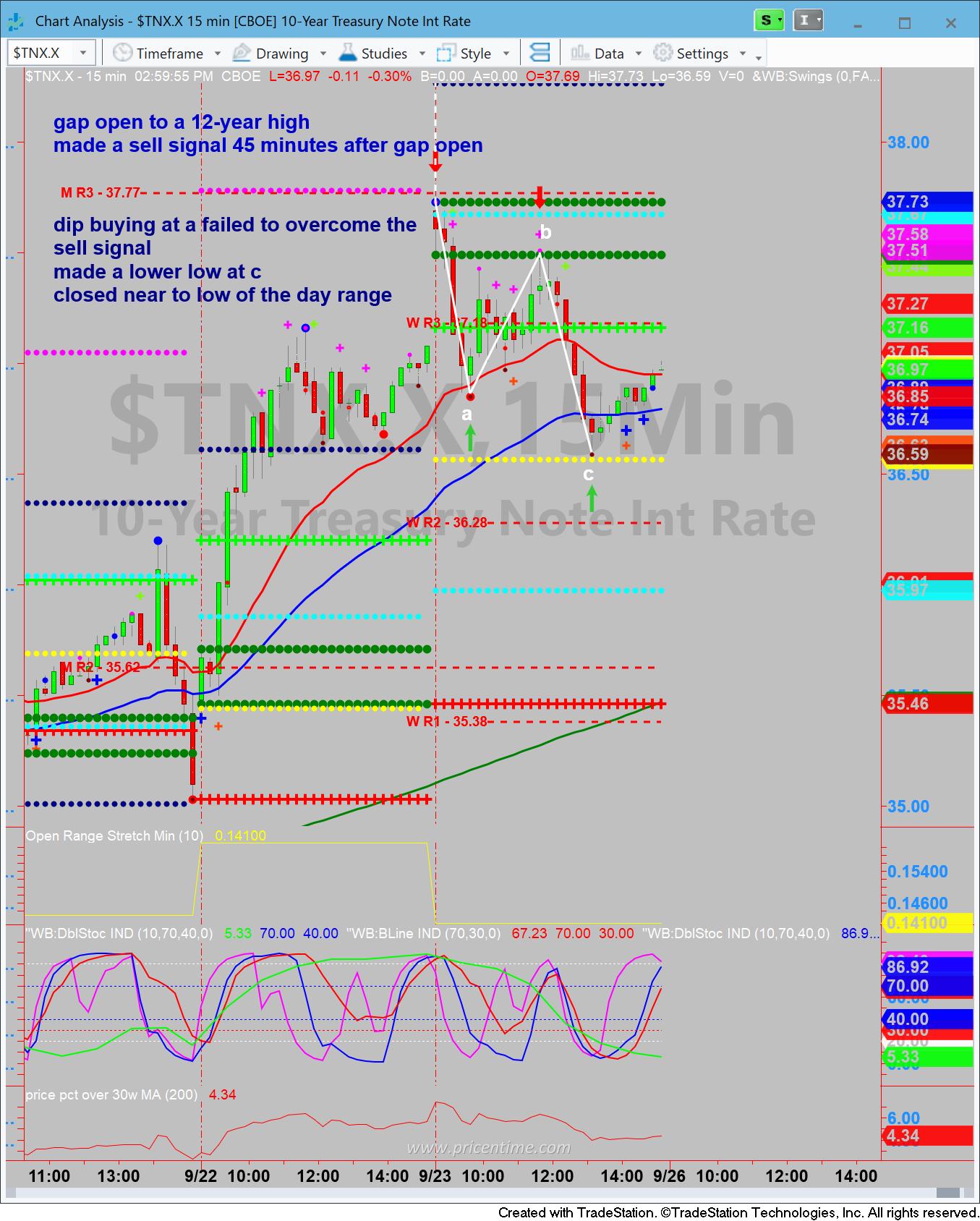 This entry was posted on Sunday, September 25th, 2022 at 8:50 pm and is filed under Forecasts, Member Only, Stock Indices, Uncategorized. You can follow any responses to this entry through the RSS 2.0 feed. Both comments and pings are currently closed.