The Financial System Is At a Breaking Point

As the Federal Reserve ramping up efforts to tame inflation, rising treasury yields sent the Dollar surging.  The Dollar index DXY is currently at a 20-year high.  The rate of change in the rising Dollar and the US treasury yields are a lethal combo for the rest of the world.  On September 28, we found out thru media that the $1.6 Trillion Britain pension fund was in crisis and Bank of England had to step in for emergency interventions.

Unbeknownst to the public, the British pension fund has been leveraged and was facing margin calls.  Bank of England stepped in to stabilize the market for a limited time to facilitate orderly exits.  The stock selloff gets all the headline attention, but the systemic risk lies in currency and debt markets.  At this point, who knows where the next highly leveraged whale is?

Here are some notable things happened last week during the stock market selloff:

2.  A rare Bank of America downgrade of Apple was released on September 29 and AAPL was promptly sold off.  AAPL has been the safe haven since the beginning of the correction, it offers safety, growth and relative value.  After the bear has mauled Crypto, SPACs, and high growth stocks, it then turns to the last standing man such as AAPL.  The downgrade of AAPL is a sign that the selloff is near its final stage.

3.  The high growth stocks are performing better during the last stretch of the selloff.  Many of the growth stocks made their correction low in May, and a higher low in June.  The S&P 500 has violated its June low, so there is an aspect of bullish divergence when comparing high growth stock to the general market.

4.  However, the SMH (semi-conductor ETF) continues to make a new low with the general market.  From SMH point of view, there is no end in sight.  When the bear market is finally over, you will definitely see a bullish divergence between SMH and S&P 500.  SMH is cyclical and it is the first sector to turn bullish.  Money knows when the economy is turning for the better first.

Technically, we are looking for the market to make the weekly cycle bottom in mid October.  Perhaps the Fed will be forced to change its hawkish tone to provide a relief rally right before the mid-term election.  The White house wouldn’t be happy to see the Fed induced financial panic so untimely.  Mid October is a typical location for a seasonal low.

If the market can finally rally out of the mid October low, it has potential to create a year-end rally to last into Q1 2023.  This rally is depended on the Fed to change message to something like “data dependent” for policy decisions, instead of auto pilot to raise rates and QT at the same time.

There are two possibilities of how the remainder of the current 4-year cycle plays out:

We think option 1 is a more likely case scenario because it really needs more time to absorb the Covid boom.  Anyway this is how we are thinking about the market right now.  We need to be flexible and be in tune with the market.

We are still holding Palantir position.  Recently Palantir reported about $600 million contract signed with the US government in September.  Finally Palantir is getting the benefit of being a defense company!  It would not surprise us to see Palantir to trade in a bullish market position like those traditional defense companies such as Lockheed Martin and Raytheon.

If you have a longer time horizon, this is the time to get long with Palantir stock PLTR.  This company has a very strong balance sheet and its product is very unique.  In the next 10 years, the world will be very different and perhaps the world war III could be upon us.  Palantir will make a lot of money if you believe the world is getting more dangerous, and more difficult for corporations to do business. 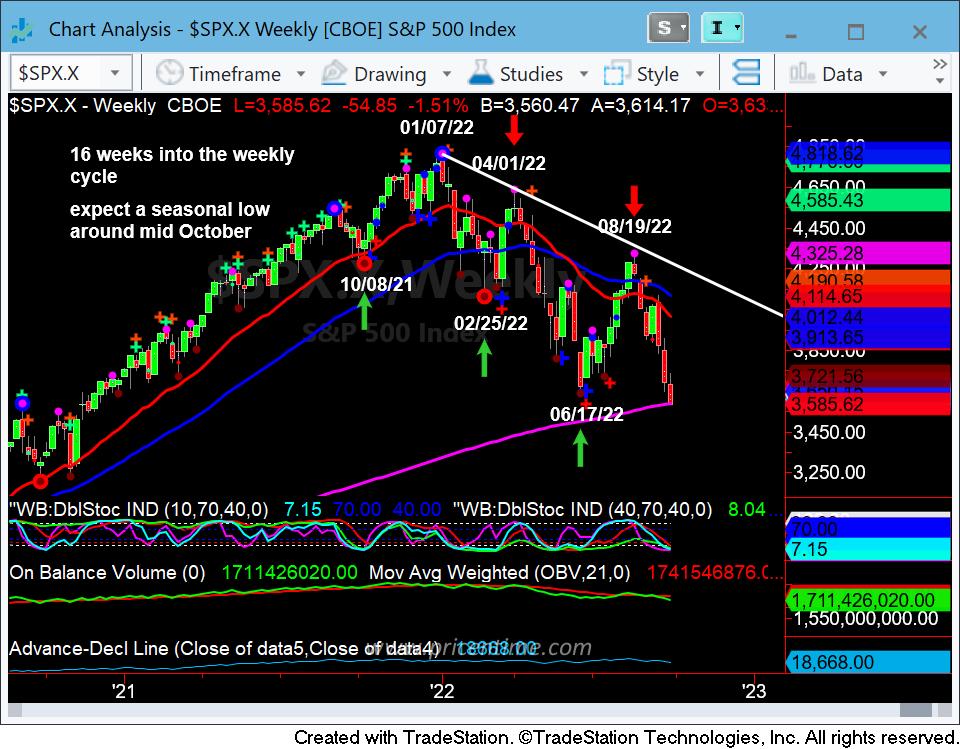 This entry was posted on Sunday, October 2nd, 2022 at 9:02 pm and is filed under Forecasts, Member Only, Stock Indices. You can follow any responses to this entry through the RSS 2.0 feed. Both comments and pings are currently closed.