The Market Just Can’t Get a Break

In our last private email, based on the consecutive two trading days’ broad breadth after the September 30 low, we stated that there were a 70% chance for the market to rally 5 days and a 50% chance to rally 8 days after the September 30 low.  Instead of meeting the expectations of past performance, the market broke down on the fifth day.  The employment data released last Friday is too strong for the Fed to pause or pivot from the inflation fight.  Even though the financial condition is already really tight, the Fed will continue to raise rates and quantitatively tighten.

At this point, the technical analysis seems to be rendered useless.  All the good technical trade setups are destined to fail, because the macro fundamental condition is ruling everything.  The best indicator would be a Fed statement that they are pausing.  Other than a clear statement from the Fed, the market will be under pressure.

The earnings season is coming up next week.  The banks should report good earnings since the rates are so much higher now.  Of course, if the economy is weakening, there wouldn’t be much borrowing activities for the banks to make money.  AMD issued pre-earnings warning last week that caused the semi-conductors to selloff.  The economy is slowing down rapidly.  We should see the earnings recession playing out in Q3 and Q4.

Based on how the market reacted to the good jobs number last Friday,we should see continued weakness,unless the Fed changes its stand.  Right now, nothing indicates that the change is coming from the Fed.

The S&P 500 closed just a little above its 200-week moving average last Friday.  This price level should provide some kind of support.  Let’s see how it trades around this level.  Oversold condition can be even more oversold.  There is no limit as to how oversold it can be. The typical oversold bounce is a function of a bear market rally.  The two-day rally from the September 30 low is a clear bear market rally.  To be honest, we were a little taken back how the bear rally can be put down so quickly.  It seems that the market just can’t get a break.  Valuation doesn’t matter, technical trading patterns don’t matter either.

Below is the weekly S&P 500 chart.  It is 16 weeks into the current weekly cycle.  In the next 1-2 weeks, we should see a weekly cycle bottom.  Will that bottom lead us to a little relief rally?  Let’s see. 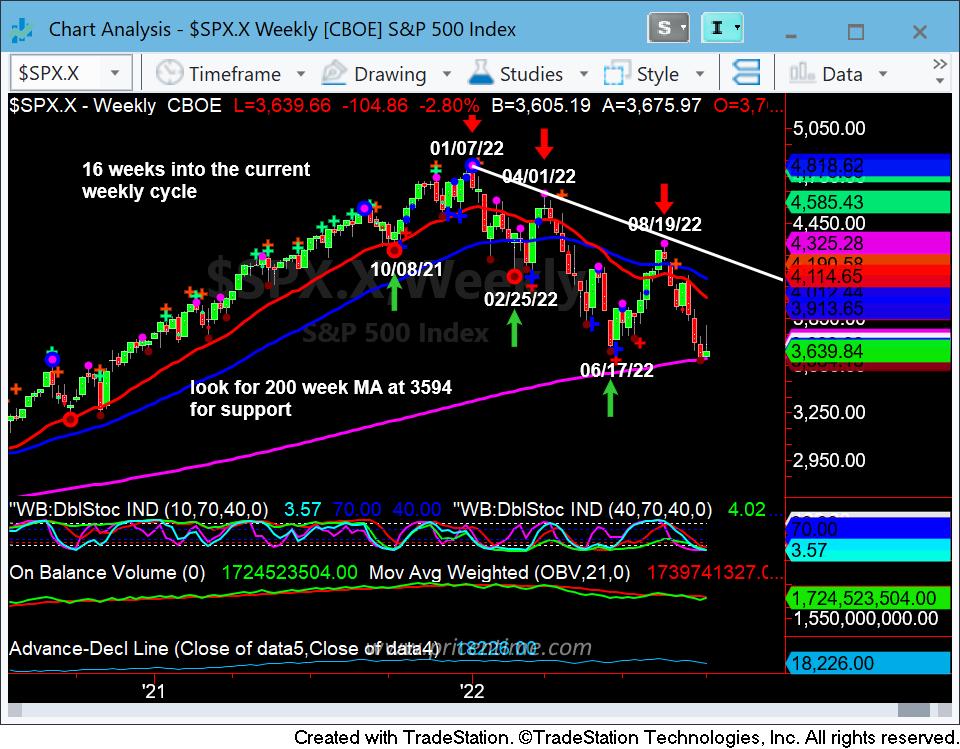 This entry was posted on Sunday, October 9th, 2022 at 9:20 pm and is filed under Forecasts, Member Only, Stock Indices. You can follow any responses to this entry through the RSS 2.0 feed. Both comments and pings are currently closed.