The Q4 Rally Is Underway

Despite the major earnings miss from Google, Microsoft, Amazon and Facebook last week, the DOW picked up the slack from the NASDAQ and is on track to be the best month since 1976!  The pundits were worried about the mega tech earnings miss to lead the market to continue the crash, but the worry was blown away by the revenge from the old economy.  The market can rally without the mega tech’s participation.  There is a new leadership in town!

Old pharma Gilead Science (ticker GILD) had a best week in a very long time.  GILD reported a not so great earnings for Q3, but was able to show investors a new growth engine in oncology drugs.  Gilead topped in June 2015 and made a crash low in June 2017 because the previous AIDS medicine growth engine was going away.  The stock has been in a dog house bottoming process for the last five years.  It had a short pop for the Coronavirus medicine, but the stock price pop was not sustained due to the effectiveness of the medicine.  This time the fundamentals and technicals are working together pointing to a new bullish trend in GILD.  GILD had a breakout last week.

Below is the S&P 500 weekly chart.  The mid October bottom is confirmed.  It is now 2 weeks into the current weekly cycle, which is expected to last till year end.  Next week is the November Fed meeting.  There will be volatility around the meeting announcement, but the volatility should be short lived.  The weekly cycle will continue as it is supposed to. 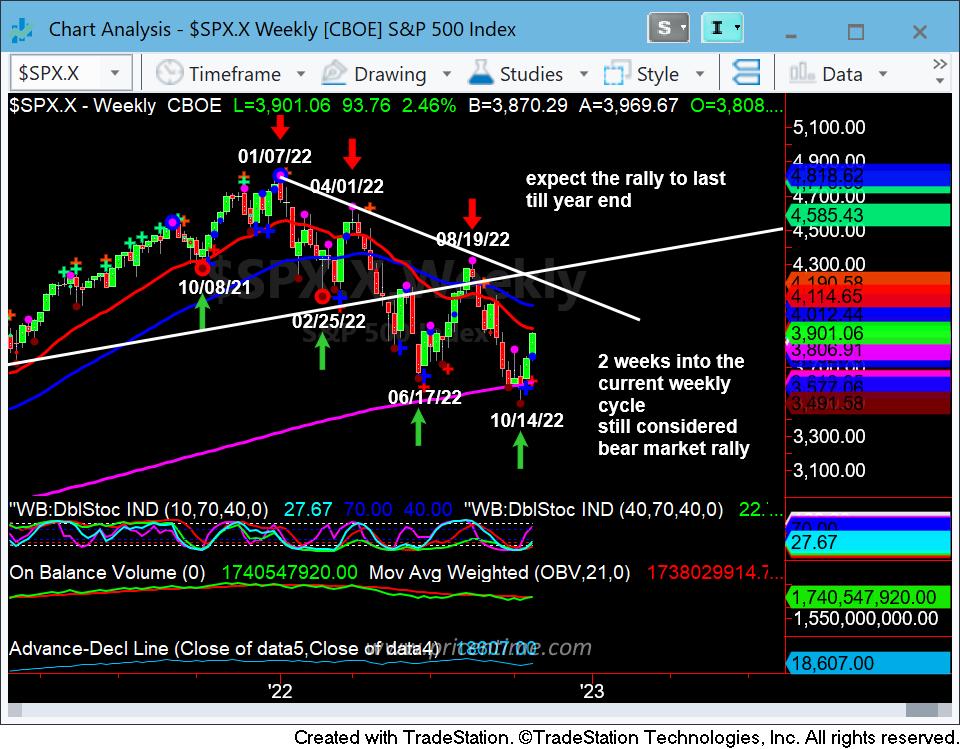 While the bottom is not in yet, but the process of forming a new leadership has begun.  We will send out emails around the Fed meeting next week.

This entry was posted on Sunday, October 30th, 2022 at 9:48 pm and is filed under Forecasts, Hot Stocks, Member Only, Stock Indices. You can follow any responses to this entry through the RSS 2.0 feed. Both comments and pings are currently closed.