Year-end Rally is in Progress

The red wave didn’t come.  The control of Congress was not decide when the market closed last Friday.  We just learned that Dem0crates will keep control of the Senate and most likely Republicans will win the House with a slim lead.  This configuration will give the White House considerable more power than previously anticipated.  Although it would be difficult for the White House to pass any major legislative initiatives. Essentially we will have a divided government, a gridlock that the politicians will bicker over everything and get nothing done.  However, the Wall Street likes do nothing government.  Get the government out of the way and let the private sector to grow their businesses without major policy changes.  This is less inflationary, so it is as good as it gets for the market even though we didn’t get a red wave.

The FTX crypto debacle is a developing deleveraging story in the crypto space.  FTX has filed bankruptcy.  We expect more exchanges or funds to file bankruptcy.  Even though it’s hard to fully assess the risk of contagion in the crpto space, it’s fair to say that the risk is limited to the crypto space and the impact to the financial system is minimum.

We never traded crypto because we are non-believers of crypto.  Who would trust their money to those exchanges run by those young kids?  Someone is going to jail for causing all the losses.  This reputational damage to crypto will be long lasting.  Will people trust crypto ever again after all the fraud has been exposed?  Probably not, if without significant regulations.

The crypto crash is what needed to finish this bear market.  Near the end of every bear market, there have always been some fraud or misdeeds to be exposed.  In this time, it is the lawlessness in crypto.

This is getting very close to the end of the 4-year cycle, the end of the current bear market.  Before it is an officially declared bull market, the fundamental news will continue to be negative.  It’s best to observe the market reaction to bad news.  Last Sunday, Apple warned about iPhone production reduction due to zero Covid policy in China.  The stock reacted mildly negative initially, but it soon was able to shake off the bad news and participated the broad market rally.  The market has priced in the negative development in China so Apple’s warning was not able to push the market down further at all.

The NASDAQ made a seasonal low in mid October and re-tested in early November.  November 10 was the follow thru day with heavy volume.  The new bullish trend is confirmed and we are looking for the year-end rally to continue from here despite the ongoing negative development in the crypto space. 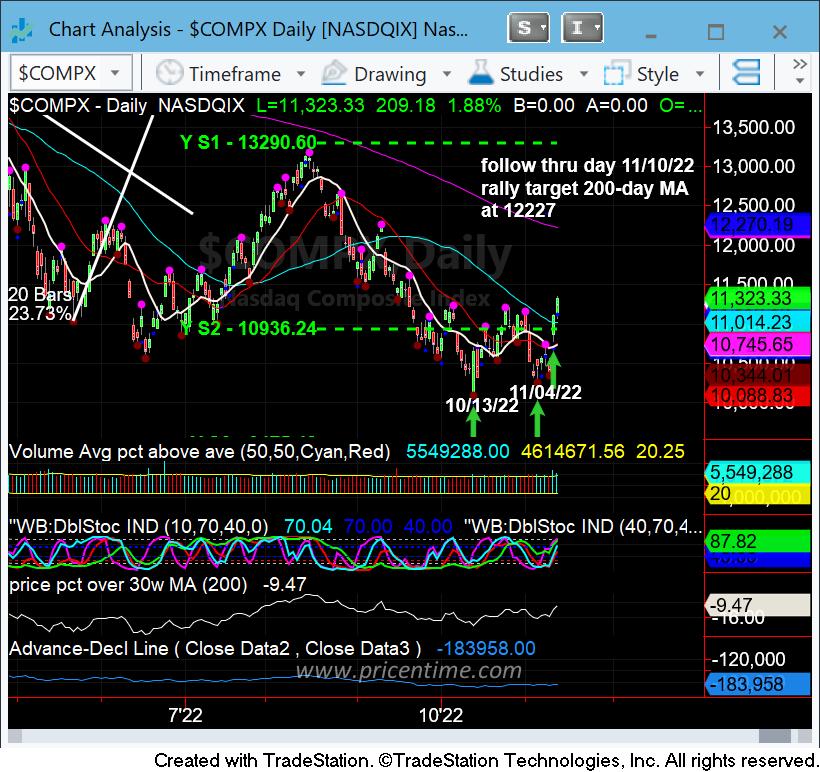 This entry was posted on Sunday, November 13th, 2022 at 9:34 pm and is filed under Forecasts, Member Only, Stock Indices. You can follow any responses to this entry through the RSS 2.0 feed. Both comments and pings are currently closed.