A Waiting Game for the Fed December Meeting

Last week was a holiday shortened trading week that all indices closed in positive territory.  As we blogged before, this is the type of difficult market that it’s hard to make profitable short-term trades.  The moves on either side are short-lived and sporadic.  The short trade definitely didn’t work out against the mid-October seasonal low, but the long trade is very laborious.  The longs are terrified that the Fed would come out any moment to stop the rally.  The Fed has been the focus for the entire 2022.  The Fed came out in late March to squash the rally which successfully took out the seasonal low in February 2022.  After the late February seasonal low was taken out in April, the market was set to make new seasonal low in October.  On the way to reach October seasonal low, the market had a nice rally from June to August, which was put down by the Fed Jackson Hole Wyoming meeting speech.  It’s natural to be fearful of the Fed because the Fed has put out the rallies twice this year.  But, the lag effects of tight monetary actions have filtered thru the economy slowly and the economy has slowed down.  The first batch layoffs have been widespread in Silicon Valley.  The layoffs in main street will follow soon after.  In the face of a slow economy, and possibly a recession, the Fed will not be able to continue to raise rates.  We are in fact at the late cycle of rate hiking.  The 10-year bond yield topped on October 21, 2022, a few days after the equities bottomed on October 13, 2022.  The rally in bond market is telling us that slowdown/recession is upon us.  The bond market provides a safe haven for this phase of the economy cycle.

In a late cycle, healthcare and staples are deemed recession proof.  Institutions are seeking dividend/safety/relative performance in those sectors.  Gilead (ticker GILD) has been in a bottoming process in the last five years and the valuation was incredibly cheap prior to the October breakout.  The investors found out about Gilead’s new growth engine in its Q3 earnings call, GILD promptly broke out of its five-year bottoming range in late October.  GILD has been going up steadfastly after the breakout.  The technical breakout is real and the GILD bull market got ways to go, especially in this late cycle slowdown/recession environment.  A lot times a technical breakout will fizzle out due to a few reasons: 1.  No fundamental earnings to back up the breakout, only some rumors or new release about corporate developments.  2.  Got good earnings, but it’s in a bear market or in a terrible sector that’s out of favor.

In the case of Gilead, all is checked out for a sustained bull market.

The market is generally negative about the tech sector because the rate hiking cycle causes more valuation adjustment than any other sectors.  But we should never forget that tech/innovation is what propels humanity for better quality of life.  The digitization will not stop because the NASDAQ has been in a terrible bear market in 2022.  Despite the weak outlook of holiday retail sales, Black Friday online sales topped $9 billion in new record.  This shows the enduring power of e-commerce.  The advent of e-commerce has completely re-shaped consumer behavior in far reaching corners.

Technically, the S&P 500 is six weeks into its current weekly cycle and eleven days into its current daily cycle (the second daily cycle in the current weekly cycle).  The S&P 500 is approaching its 200-day moving average.  We suspect that the S&P 500 will not be able to trade above its 200-day moving average without a catalyst.  The next catalyst comes in November CPI reading on December 13 and the Fed December meeting on December 14, 2022.  There will be 13 trading days before December 14, 2022.  We are guessing that the market will be meandering until the Fed December meeting announcement.  That’s why we say it is a waiting game until then.

If the Fed openly acknowledges the lag effects of rate hiking and says that the rate hiking pace will slow down from December meeting, the market will respond positively and the year-end rally will continue.  Anything short of some definite dovish statements from the Fed, the market volatility will continue to persist.

If indeed, we get a dovish Fed in December meeting because inflation has come down quite a lot, the market could even rally in 2023.  We have to wait for the December meeting before we can be sure of the nature of the year-end rally.  October 2022 low could be similar to December 2018 low.  In December 2018 meeting, the Fed used the word “auto pilot” for rate hiking.  The market didn’t like it and threw a big tantrum.  The Fed soon came out pivoted from the “auto pilot” lingo and stopped rate hiking all together.  The market rallied 14 months from the December 2018 low to Covid high in February 2020.  The 14-month rally was very defensive as the market was impacted by the higher rates and trade war with China from December 2018 to February 2020.  We could have a rally in 2023 just like 2019 and then the 4-year cycle finally bottoms in Q1 2024.  The administration will do its best to have a great stock market in 2024 in a hope to win the re-election.  This is what we are contemplating, nothing is set in stone at the moment.

Below is the S&P 500 cash index weekly chart.  It is six weeks into the weekly cycle and it is still considered bear market rally.  It is 11 days into the current daily cycle and most likely it will fail the 200-day moving average without a catalyst from the Fed in December meeting on the 14th of December. 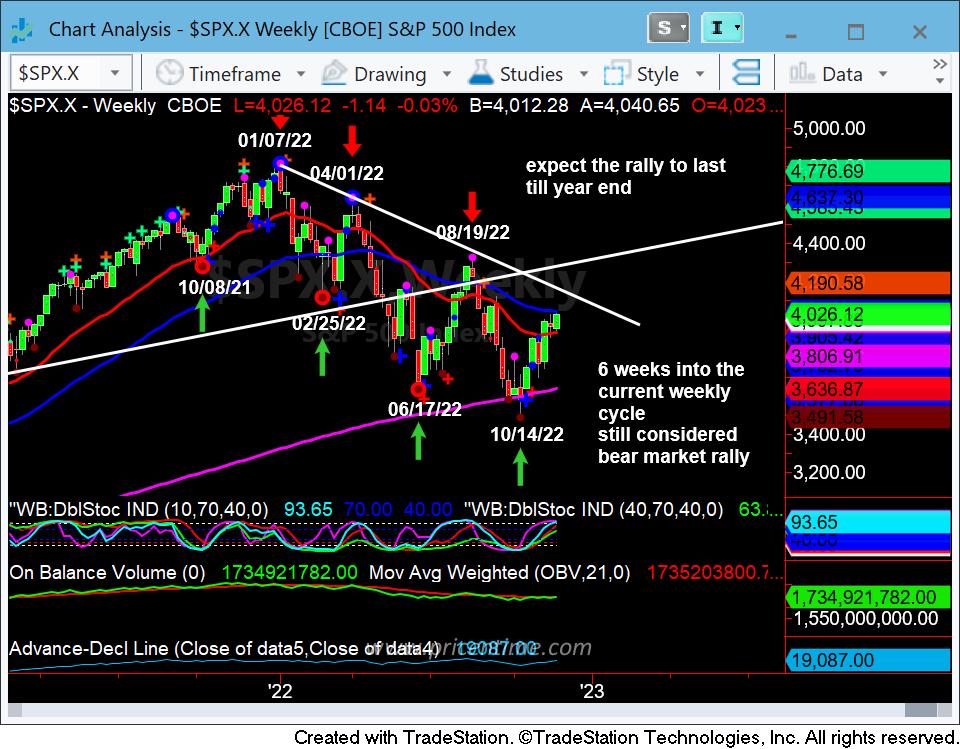 This entry was posted on Sunday, November 27th, 2022 at 7:48 pm and is filed under Forecasts, Hot Stocks, Member Only, Stock Indices. You can follow any responses to this entry through the RSS 2.0 feed. Both comments and pings are currently closed.