The market has been in a consistent sour mood since the beginning of December.  On the last day of November, the Fed chair spoke about slower pace rate hike in December Fed meeting.  The market rallied for one day and then changed mood to be decisively bearish.  The hope for a year-end rally has been drowned with recession talks.  At this point, it is pointless to debate the odds of a recession in 2023 because it is still too far out.  But we are pretty sure that the market is in the late stage of this 4-year cycle.  The Fed is closer to the finish line of the rate hiking cycle.

The first chart is a long term weekly ratio chart on XLY/XLP–Consumer Discretionary against Consumer Staples.  When the XLY/XLP ratio chart is in down trend, it signifies a risk-off environment, meaning that investors have no appetite for risk.  In this weekly chart, you can see that it is below the long term trend line.  This long term trend line is drawn by connecting the 2008 low with the 2020 low.  This chart shows that the market is under going a major correction since the financial crisis.  The Fed is undoing the easy money policy instituted since the 2008 financial crisis in a very rapid pace.  This chart is pointing down right now, the bottom is not in.  Risk appetite is not showing signs of life at the moment. 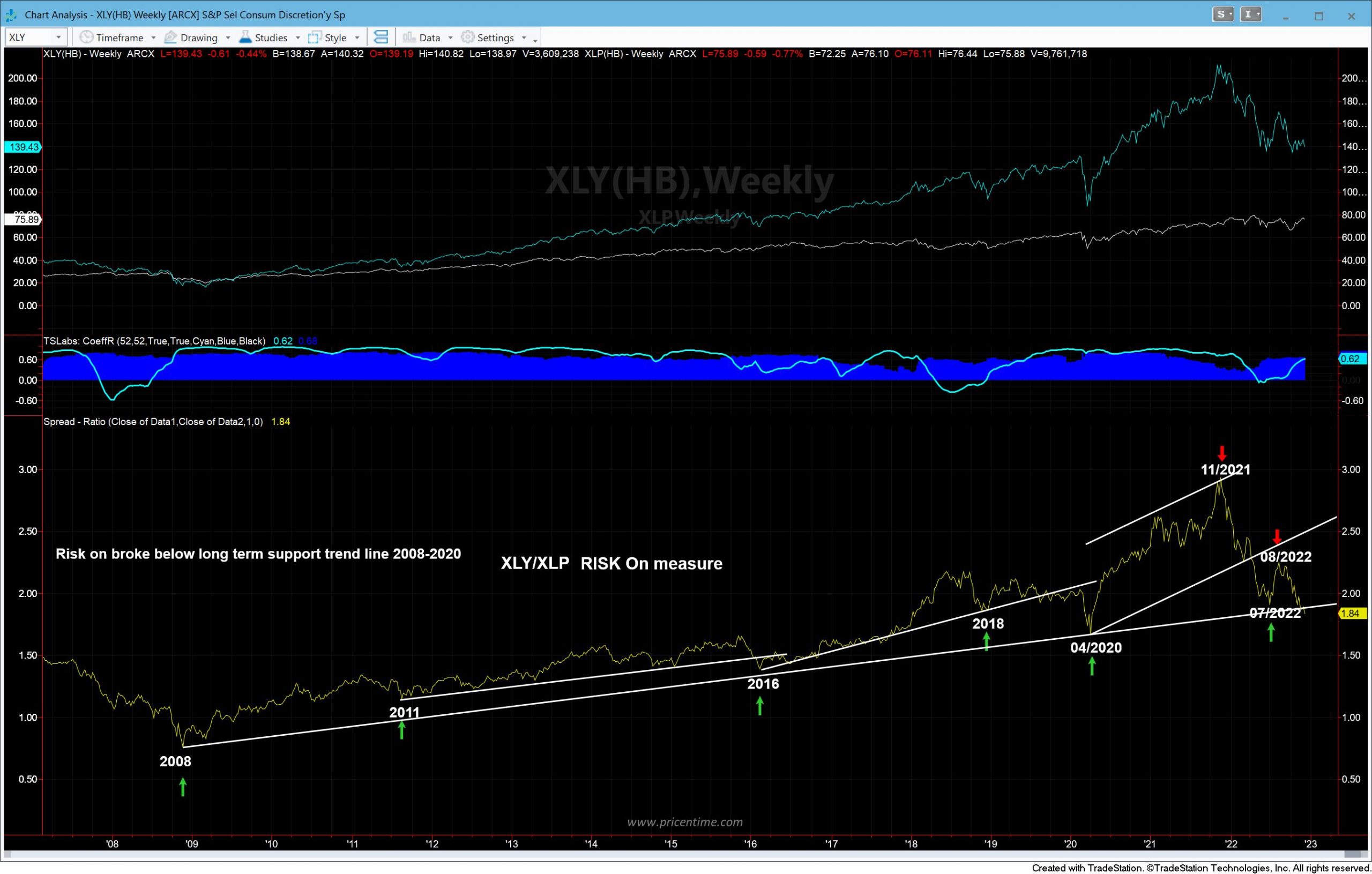 The second chart is a long term weekly XLE/XPY ratio chart– Energy vs. SPY the general market.  This ratio chart shows that energy sector is still under the long term 2008-2014 trend line despite the war in Ukraine.  The November 2022 top is confirmed and the energy sector will be down for the next two months.  We have to see if it will breach the support line below.  If the support line is broken in the next two months, it will provide great fundamental support for the stock market. 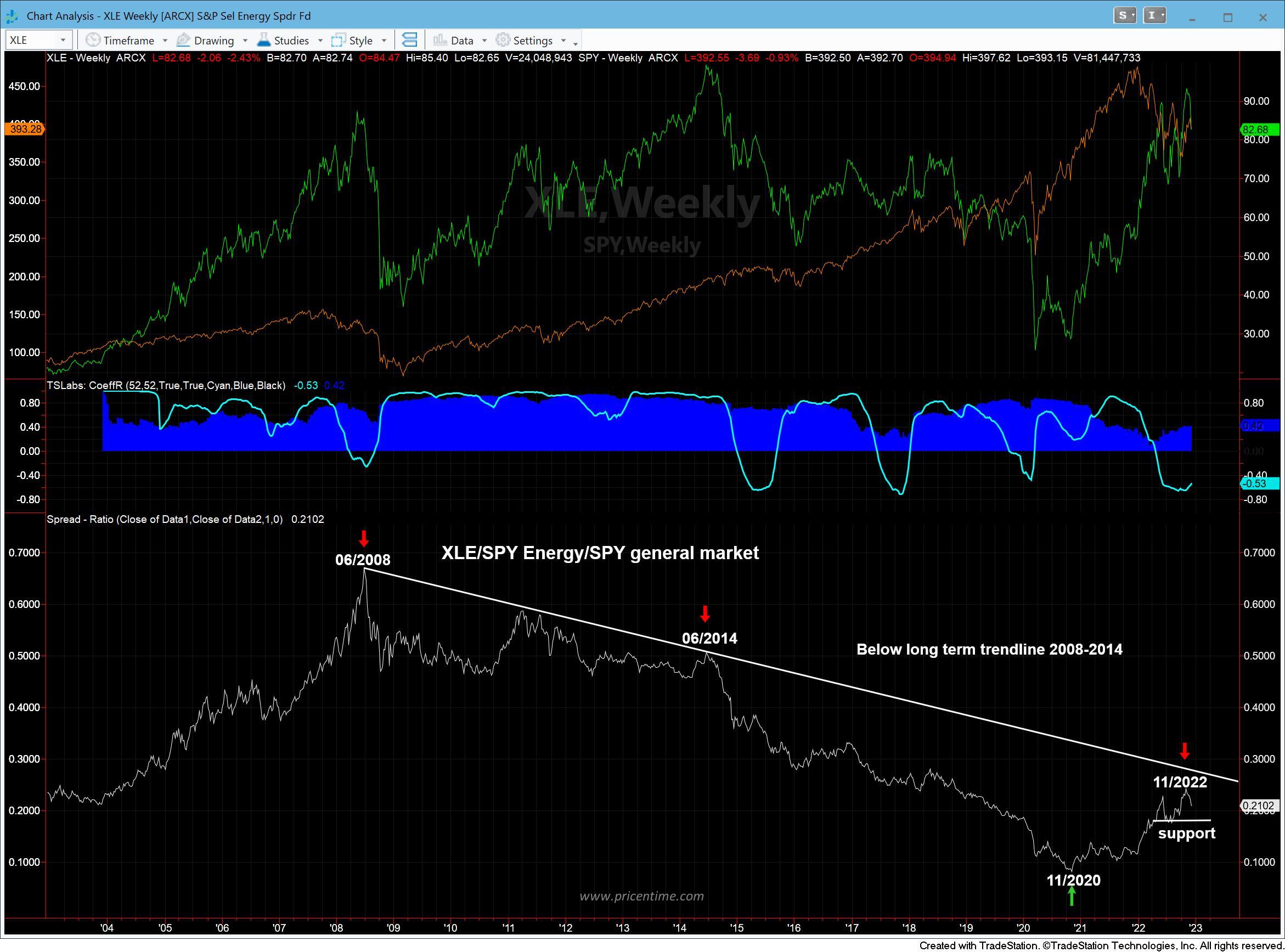 The next chart is a long term weekly ratio chart of XLV/SPY, Healthcare against the general market.  Healthcare is the sector where investors hide during recession.  You can see that right now the Healthcare XLV is in a bull market locked in the up trend channel lines.  When the XLV/SPY ratio chart makes a top, the bottom in the general market is not too far.  We don’t see a top in XLV yet. 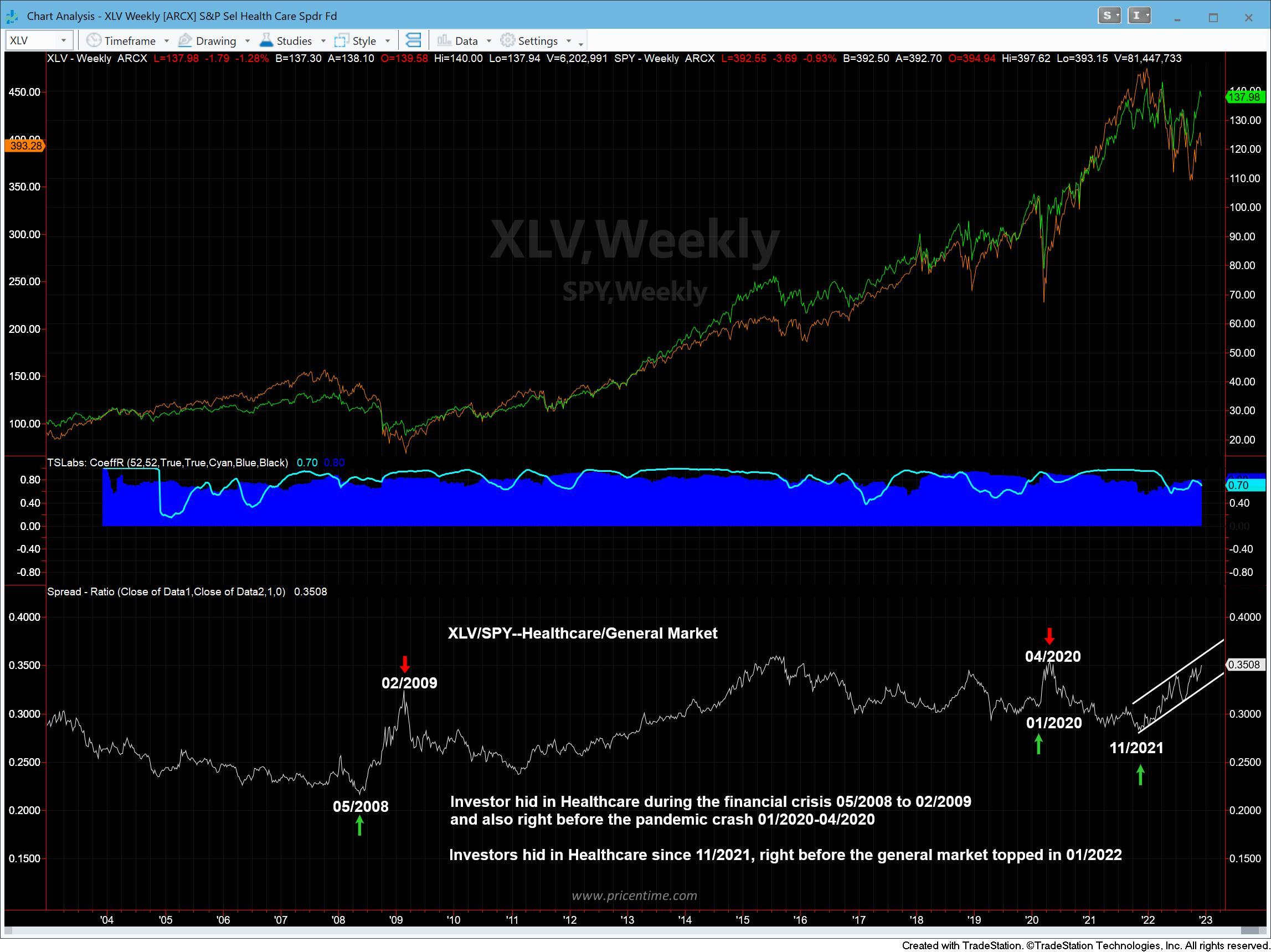 All in all, these ratio charts are showing us:

The November CPI will be released next Tuesday at 8:30 am and the Fed will speak next Wednesday afternoon.  It is anticipated that the Fed will raise 50-basis-point in the December meeting and the CPI data will show inflation is easing.  The investors may react negatively  to these two events because of the recession worries.  If there are any positive price actions, we would be selling calls and perhaps buying puts in XLE too.

We don’t hold much hope for the year-end rally, mainly because the Energy and Healthcare sectors have behaved such way showing us the general weakness in the stock market.  We anticipate the equities to make a bottom in Q1 2023.

This entry was posted on Sunday, December 11th, 2022 at 9:03 pm and is filed under Forecasts, Member Only, Stock Indices. You can follow any responses to this entry through the RSS 2.0 feed. Both comments and pings are currently closed.