Are Sellers Exhausted Or Something Else?

Since the December FOMC meeting on December 13, 2022, the market has been thoroughly scared of the Fed’s hawkish rhetoric.  The S&P 500 was sold off to make a bottom on December 22, 2022, right before the Christmas and New Year’s holiday.  The market has been trapped for 9 trading days until the December Employment Situation report on Friday January 6, 2023.  The US payrolls show labor market remains strong but wages rises cool.  The market loved the news that wages are cooling and the S&P 500 rallied 2.28% last Friday.  This rally took place after nine days of torturous sideways trading.  It could be exhaustion.  It couldn’t go down anymore, so it went up after a little bit of good news.  This rally could potentially confirm the weekly cycle bottom being made on December 22, 2022.  If indeed the December 22, 2022 low was proven to be the weekly cycle low (October 13 – December 22, 2022), then this weekly cycle is very short.  It is only 10 weeks in this weekly cycle.  It has happened in the past with short cycles like this one.  The fundamental events sometimes contrast or extend the cycles drastically like this.  The markets have been completely driven by the monetary policies in year 2022, therefore it is not unusual to have extra short or long cycles.

Below is the S&P 500 daily chart.  It looks like the S&P 500 has confirmed a daily cycle bottom and is on the way up.

But the Fed is still the boogeyman and they can come out anytime to scare the market.  So we are not going to act on this trade signal.  We are not bearish, we believe that the worst fear has priced in.  We are not bullish either because the Fed will not allow the market to go anywhere until inflation is significantly lower.  This has been very hard on trading.  It is trend less.  Despite the bearish rhetoric, the shorts are not having a good time shorting the indices.  They may have made good money by shorting Tesla.  Tesla and Apple are the most loved stocks in the previous cycle.  Tesla is the best hyper growth stock.  There isn’t another CEO who is as exciting as Elon Musk in the history of the worldwide markets.  Apple is the most enduring consumer brand in human history.  Now both Tesla and Apple are being mauled by bears mercilessly.  This is the sign of a late stage bear market.  The weaker stocks get destroyed much earlier than the best of the breed.  The average growth stocks peaked in February 2021, and started to break down hard in November 2021. Tesla peaked in November 2021 and started to break down hard in September 2022.  Apple made a triple top in August 2022.  The Apple bear market didn’t start until August 2022 while the weaker stocks have been in bear market for one year and a half already.  There is no survival in a bear market.  Even the best of the breed will suffer.

We believe Tesla will not be a market leader in the next cycle.  Tesla was valued at $1.2 Trillion at the peak when all the future potentials have been realized.  It would be very hard for Tesla to pass that watermark in the next 2-3 years.  We are not sure if Apple will be a market leader either.  Probably a new breed of AI software stocks will be the next hottest thing in the next cycle.  Humans never cease to imagine and speculate.  There will always be the next hottest thing in the market. 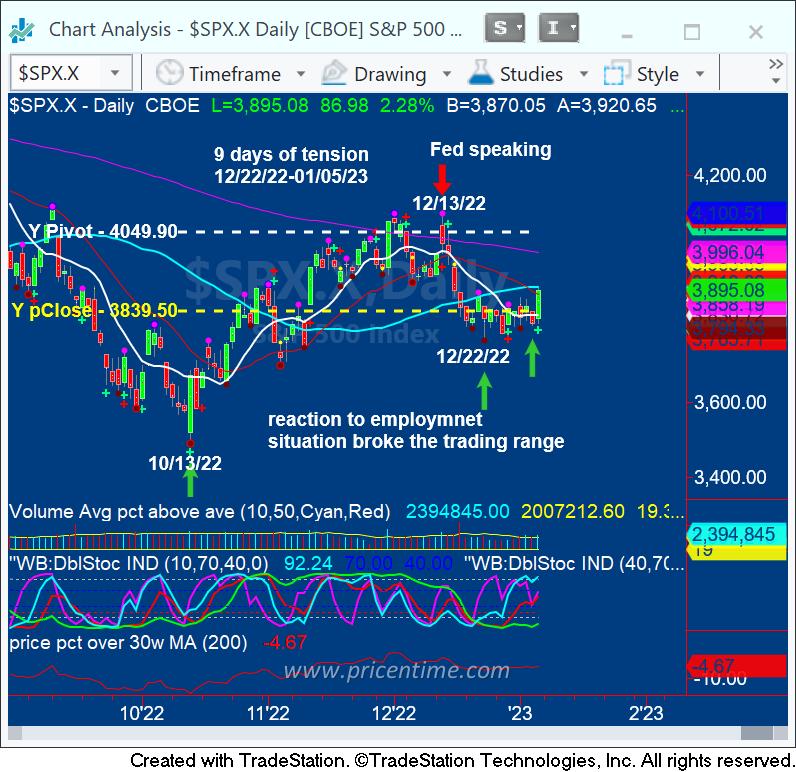 This entry was posted on Sunday, January 8th, 2023 at 9:02 pm and is filed under Forecasts, Hot Stocks, Member Only, Stock Indices. You can follow any responses to this entry through the RSS 2.0 feed. Both comments and pings are currently closed.