The Rate Hiking Cycle Is Closer to End

We had December CPI release and banks’ earnings reports last week.  The December CPI was falling as expected and the banks’ earnings were not as bad as feared, although the CEOs kept talking about “mild recession”.  The sentiment continues to be bearish, but the price action is quite bullish.  The S&P 500 cash index closed above its 200-day moving average again last Friday.  This is the second attempt of the S&P 500 closing above its 200-day moving average since April 2022 when it first fell below 200-day moving average.  The first attempt was at the end of November 2022 as a result of rallying out of the mid October seasonal low.  The Fed officials promptly talked the market down via hawkish statements through conferences and media, etc..  One of the major tools that the Fed employs is public statements.  The Fed knows its power so they would come out at odd times to move the markets to their desire.  The worst nightmare for the Fed is to lose credibility that their words would not scare the markets anymore.

Historically speaking, there is an 81% chance of having a better 2023 than 2022.  It’s rare for the stock market to have two bad years in a row.  2023 didn’t have to make an all time high to be a great year.  Because it starts in a bad position, anything better than 2022 is a win.  It looks like the June 2022 momentum low was tested in October 2022.  So as long as the mid October low holds, we are looking at a bullish trend from the mid October low point of view.  The rise out of the mid October seasonal low has been laborious because the Fed is actively holding the market down.

We sent out a private email last Tuesday stating that the market was positioned to react positively to the December CPI release and banks’ earnings reports because the early bullish cycle sectors have turned around.

The XLY/SPY relative chart has stopped down slide, even though the down trend line hasn’t been broken – Is the bottom in already?  XLY/SPY is an indicator for risk on appetite.

The XLE/SPY relative chart is making a top formation – Is the energy rally over? Probably.

The XLP/SPY relative chart is returning from a breakout position – is the risk off attitude finally done? Yes

The XLV/SPY relative chart is under performing the general market.  Is the rotation from healthcare to oversold tech/growth stocks happening now? Yes

Reading from the relative performance charts, it’s time to get out of XLP and XLV now.  If you are aggressive, you can put some money into SMH, or AMD/NVDA.  AMD and NVDA are the best growth stocks in semi space.

Technically, it is 13 weeks into the current weekly cycle that started on 10/14/2022.  If the market continues to hold up during the remainder of January 2023 earnings report season, then it could make a top by the 16th week (proper top timing band during this bullish weekly cycle) right around February 1 2023 when the Fed holds another meeting.  The market probably will show some respect to the Fed and sells off a little bit during the Fed conference.

We believe that the market can hold up in the next few weeks because the earnings will probably not as bad as feared. 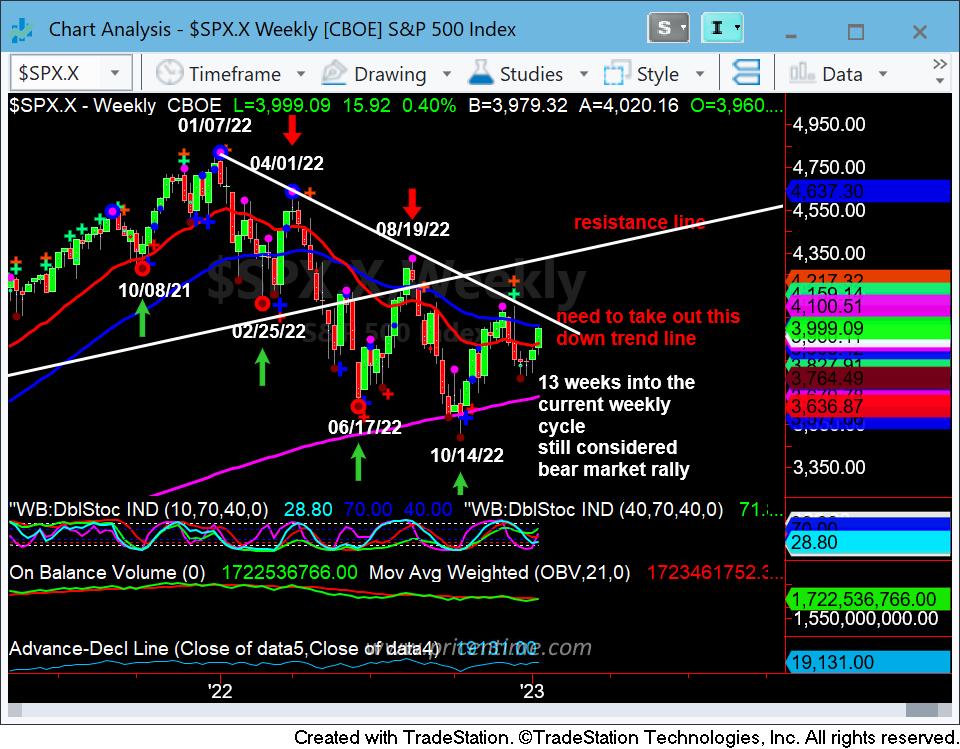 This entry was posted on Sunday, January 15th, 2023 at 8:46 pm and is filed under Forecasts, Hot Stocks, Member Only, Stock Indices. You can follow any responses to this entry through the RSS 2.0 feed. Both comments and pings are currently closed.