Cycle is a natural phenomenal.  Cycles are everywhere.  Our solar system moves in a cycle around the center of the Milky Way galaxy, the planets move in precious and predictable cycles around the sun, etc.  Other cycles are such an intimate part of our daily life that it may be hard to think of them as cycles. The cycle of sleep is experienced by most of us every 16 hours or so.  Both men and women experience a monthly cycles of emotional highs and lows.  The cycle of a heartbeat is as regular as clockwork until disturbed by exercise or an emotional experience such as a margin call.  These are all cycles we can understand and accept because we have an understanding of the underlying cause of these cycles.

Many other cycles affect our lives for which we do not know the cause.  The non-profit Foundation for the Study of Cycles has been isolating and studying cycles since the 1930’s, and has documented over three thousand cycles in weather, war, sunspots, drought, marriage, animal populations, inflation, bank failures, real estate, manufacturing, steel production, and stock prices, to name only a few.

The cycles in the markets are not the Holy Grail.  There really is no Holy Grail in the trading business.  But for us familiar with cycles, cycles are the glue that holds the markets together.  Other techniques such as Edwards & McGee patterns, or Elliott Wave don’t have the time element in the markets.  They offer little to none predicative value of the markets.

In our cycle approach, the longer cycle sets the trend. The price activity is the result of many interactive cycles.  The cycles that we are going to use are the dominant cycles.  All markets have cycles of more than a year that give us the long-term picture.

The cycle that affects most of us is the “seasonal cycle”.  The long-term cycles always top and bottom with a seasonal cycle.  The seasonal cycle sets the trend for a large part of the year.  For example, in a bull move out of a seasonal low, a rise of 7 months or more is not uncommon.  The trend, then, would be up for seven months.  Conversely, in a bear move, the market can move down for 7 months or more from the seasonal high.  So identification of the seasonal high would set an expectation for a prolonged bear market.  Seasonal cycles are easy to accept in the agricultural markets because we know the cause.  Generally, it is harvest which sets the lows, and prices move higher throughout the year until the next harvest with variations based on increases or decreases in demand, supply and expectations.  But there are also seasonal tendencies that show up in the metals, the stock market, interest rate markets, and currencies that are not as consistent as the agricultural markets.

Our approach is to isolate the time periods in which seasonal highs and lows have occurred 70% or more of the time, and call this the basic seasonal cycle.

Primacy cycles are of primary importance to trade with trend, and it is this cycle that sets the trend for most trades.  All markets have a primary cycle, and this primacy cycle is measured in weeks.  That’s why we interchange primary cycles with weekly cycles all the time. 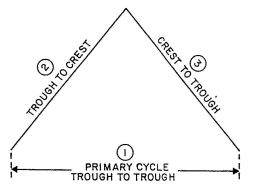 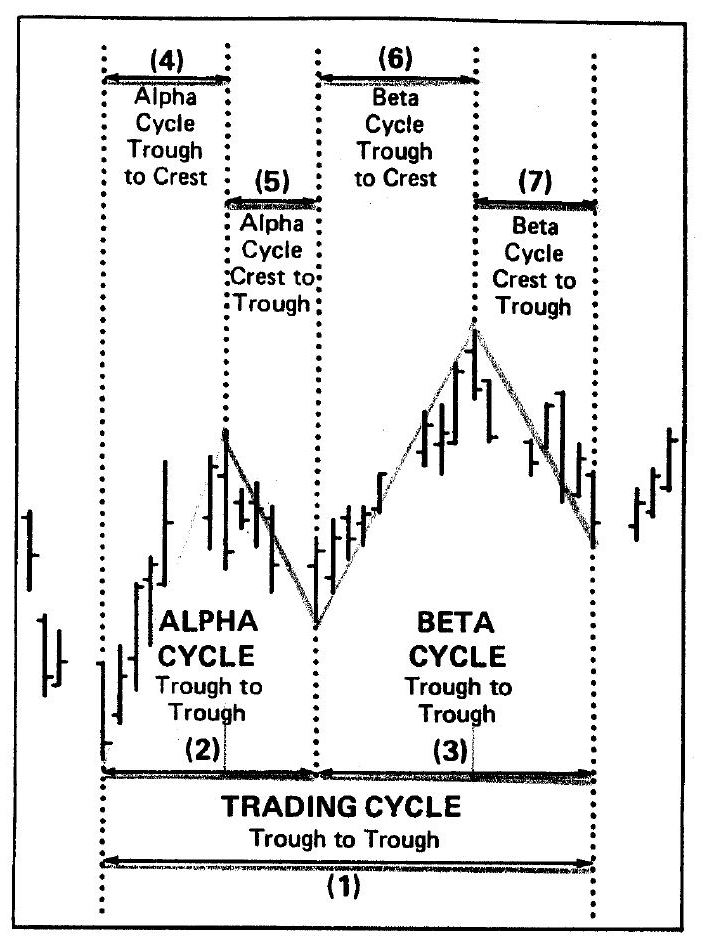 It is fundamentals that move the markets, but you have probably noticed that the fundamental picture is the most bullish at tops and the most bearish at the bottoms.  Cycle analysis assumes that at any point in time, the then current fundamental information available is relative only to the current price structure and that fundamental events will occur to move prices in the direction of the cycle.  Such an event may be a government report that greatly changes the supply or demand picture; money supply figures; utterances of Federal Reserve officials; foreign purchases; crop failure or freeze in any part of the world; war or the threat of war; unexpected political action such as embargoes, tariffs, or price controls which can change either the supply or demand picture.  There are many other unforeseen factors that can alter the prospects for the future.  Cycle analysis does not pretend to forecast what will happen in the future, just that some event will occur to move prices in the direction of the cycle.

Unfortunately, cycles can contract, expand and even skip a beat now and then.  The use of oscillators, pattern recognition and smaller time frame cycles are powerful tools that often allow for early identification of cycle highs and lows.  Once a high/low has been identified, the component parts of the cycle are used to set up time expectations for the next high or low.  Cycle analysis is more often an art than science.  Despite its limitations, cyclical analysis is the one approach that can provide relatively accurate time and price projections weeks, months, and even years into the future.

The daily pivot range is calculated based upon the high, low, and close of the previous trading day.  The daily pivot range identifies this price range as the meat of the market from the previous trading day.  When the price stays in this range during the next trading, it means the market has no new opinion.  Any new intraday positions should take consideration of this price range.